Posting here to get some solid advice on what to do. I've endured a long and arduous headache with this car and really don't know who else to turn to. I will try to explain as much as possible and ill provide a video for you all to see. *Please read the video description*

Quick Backstory:
Earlier this year I purchased a 2018 Mustang GT PP1. The car is under warranty, so I can at least sleep "sane" about the problem. I need help in maybe identifying what the issue my car is facing is. When I received the car in January it was working absolutely flawlessly. The car suffered no issues/problems up until the early summer.

The Problem:
Early in the summer, the vehicle began to experience odd start-ups. The problems began first when the vehicle started warm (going to start it after grocery shopping,etc). The vehicle would crank for a while and start-up very very weak/sluggish. If I were to turn off the car and turn it back on right after, it would start as if nothing was wrong with it (quick and healthy). This is quite frustrating and embarrassing as when starting the car in public as it sounds broken. It is important to note that the car performs perfectly as this issue is related to the car starting (to my knowledge). This problem only became more and more frequent as the dealership kept putting parts into it to "fix" the solution.

Action to Resolve:
When I first experienced the issue I took it to the dealership so that they may diagnose it. They first assumed the battery was failing and replaced it to see if the issue would go away. I took back my car and hoped it solved the issue but it didn't. I return and this is where it gets interesting. The dealership from about this point on has been actively working with the ford engineer hotline, field service engineers, and the dealership master technician (30 years of experience mind you lmao) to resolve my issue over the course of about 6-7 months now. I had taken it for a period to get a second/third opinion as it was frustrating going so long without a solution. I took it to a reputable performance shop in Houston as well as another major Ford Dealership in the area and received this.

Shop: Determined that the fuel in the vehicle was being sent back to the gas tank and when I would start it for the first time between activities it would have to work the fuel from the tank all the way to the engine again. They advised that I tell them(the dealership working on my car) to replace the fuel pump especially since its under warranty.

Other Ford Dealership: This dealership reported the same finding as the shop but argued that they wouldn't want to fix it as "the dealership that started the work has to finish it under warranty" a claim that the dealership actually working on my vehicle rebutted and said "anyone dealership can fix the issue under warranty not necessarily the person who started it"

Current Status:
As of today, the vehicle is still at the dealership. No light at the end of the tunnel and really feels more so that they are slapping parts in blind hoping one fixes the issue. I've complained numerous times to Ford Corporate, they are working with both me and the dealership to resolve the issue and establish a "good faith" payment. I've complained to the dealership and they are having it as a "top priority" and are starting to get known as the "problem child" of their cars as nothing gets fixed. I have some papers that tell me what's been replaced and will post them here when I get the chance to scan them. After the most recent addition, the PCM, the car won't go faster than 80mph, it is capped here for some reason. The start issue is now more frequent with the car as well. Cold starts are weaker, and the problem will always happen on the first start after the cold start (starting it after grocery shopping, going to the gym, ect). One thing I have noticed too is when I do have that ugly start is that the RPMs will always start at 1kish and would gradually work their way down to 600-700ish after it's "warmed up". Another thing I notice as well is that sometimes there is a strong smell of gasoline. I have checked the bottom to see if gasoline is dripping anywhere but I find none. (any ideas to it?) Another thing I've noticed about the start is that it sounds a lot weaker/sloppy now. Additionally, In situations where I turn off the car for about a minute and turn it back on it starts absolutely quick but not normal if that makes sense. It's like if it sparks the combustion but starts off a puff of gas (not sure if that makes sense I will get footage of this when I can)

Video: *This video showcases 3 starts! this was taken earlier when the issues were starting*

If anyone has any, and I mean ANY advice on what to do. I am all ears. This car was something I was very excited about as it is my first big purchase, especially cause I've never driven a car that is still considered this new. If there is any part I was not making sense in, let me know and I can clear it up as best as I can. :(

I once had a similar problem. The car would start OK-ish when cold, but very sluggishly (if at all) when warm, particularly if it had been turned off very recently, as in a few minutes earlier. And when it happened, there was a distinct smell of petrol.
In my case it was the fuel pressure regulator. The engine was running rich because of the fuel pressure being too high. Running rich when cold isn't such a big deal, but it is a big deal when warm. And it causes unburnt fuel to be sent down the exhaust, hence the smell.
To make matters worse, the fuel pressure wasn't being monitored by the ECU, and the regulator was purely mechanical, no sensors, so there was no error code whatsoever.
I don't know if you've got the same problem, but it could be a starting point for your investigation.

Vlad Soare said:
I once had a similar problem. The car would start OK-ish when cold, but very sluggishly (if at all) when warm, particularly if it had been turned off very recently, as in a few minutes earlier. And when it happened, there was a distinct smell of petrol.
In my case it was the fuel pressure regulator. The engine was running rich because of the fuel pressure being too high. Running rich when cold isn't such a big deal, but it is a big deal when warm. And it causes unburnt fuel to be sent down the exhaust, hence the smell.
To make matters worse, the fuel pressure wasn't being monitored by the ECU, and the regulator was purely mechanical, no sensors, so there was no error code whatsoever.
I don't know if you've got the same problem, but it could be a starting point.

i feel like this is one of those things they might have looked at as well. I will be contacting thing first thing in the morning to verify, but it seems that we are having/had the same exact issue. I am also getting no error codes as well. Hearing this gives me hope. I really appreciate you sharing you’re expedite with me. I’ll post an update when I visit the dealership tomorrow! 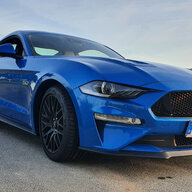 (new car).
Today after a longer drive and coming back from shopping I had this for the first time, the car was warm. 5 minutes later after refuel no problem. I will observe this.

How many miles now, and when you bought it? The problem with used cars is you don't know what the previous owner did, especially if buying from a dealer. At any rate, on those video starts, the battery seems perfectly fine, as the engine spins as quickly as my car with the battery fully charged. But yes, it hesitates to start, like if not enough fuel pressure. Or bad fuel. Did you check for DTCs with FORScan? I'd start there. Then proceed eliminating variables. Good luck.
2019 Bullitt DHG K7979, MagneRide, Electronics pac, cover. MODS: Blendmount/Mirrortap V1 mount, 61148BCX black Gorilla lug nuts, Steeda jacking rails, OEM rubber floor/trunk mats (5), OEM dual horns, DD reflectors/LEDs, GT350 gauge pod, 35/20% tint. Radiator screen, 'de-studded' engine. 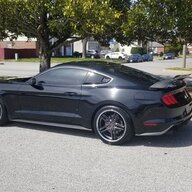 I wish you luck on this one and I’m glad it’s under warranty. I once had an older used fox body 1986GT I purchased in 1998. It had a starting issue where I replaced everything : battery, starter, alternator, battery cables. It turns out the gremlin was a pickup relay. After $300 dollar in parts I think the relay was about $15.

I did the above work myself but I could imagine the labor and time a dealer can take.

Bright side when they do find the culprit you got new parts and push come to shove if you need to trade it for a 19 or 20 the dealer should swing you a sweet deal and over value your trade to get you into something newer.