Granger Ford- Discovered them on this forum. As has been outlined by many, their customer service is excellent. Best price on the car I could find, excellent communication, complete follow-through and super easy transaction. I have purchased cars from Toyota, Honda, VW and BMW and this was by far the best dealer I’ve had the experience to deal with. Really, you can’t go wrong, only issue I had, not dealer related, was the production delay. Ordered March 8th, picked up November 12, 2021. The whole crew is outstanding from sales, to finance to delivery. Can’t recommend them highly enough. If I buy another Ford product, it will be through Granger (the new Ford Bronco looks pretty cool BTW).

Mach 1 – Just some observations and comparisons. I have a few hundred miles on both 50th anniversary Mustang GT with PP and Roush supercharger and 2017 GT350.

Those are my initial impressions over the first 1,200 miles on the car. Looking forward to a bunch more. As above, the car purchasing experience was excellent and the first big trip was a great experience. Can’t wait to get the car on-track to try the environment it was really designed for. Hope this is useful for some of you who might be sitting on the fence. Granger removed the fender emblems and PPF shop took off the decals. I like the look too. It's a bit understated but the car has nice lines and I don't think it really needs the decals.
OP
OP

Couple of questions for Mach 1 owners
1) How do you turn on the heating for the steering wheel?
2) Is the FordPass WiFi complementary for a trial period or do I need to sign up for WiFi and if you need to sign-up, how do you do that?

VictorH said:
Couple of questions for Mach 1 owners
1) How do you turn on the heating for the steering wheel?
2) Is the FordPass WiFi complementary for a trial period or do I need to sign up for WiFi and if you need to sign-up, how do you do that?
Click to expand... 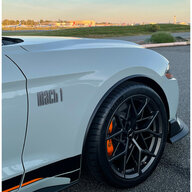 great review @VictorH and happy to hear you like your initial impressions with the car! granger is definitely the place to buy from!

the cup2's are definitely track focused to say the least and not something i would want to live with on the street. they are different than the standard gt350 cup2's which is probably why you are noticing such a difference.
and yes the gas tank is laughably small

just going for a cruise i can watch the needle move! 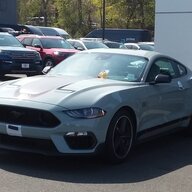 VictorH said:
Couple of questions for Mach 1 owners
1) How do you turn on the heating for the steering wheel?
2) Is the FordPass WiFi complementary for a trial period or do I need to sign up for WiFi and if you need to sign-up, how do you do that?
Click to expand...

LOVE that look without decals. Do you have any more pics?

Glad to hear you enjoyed your transaction and trip. The Mach sounds like a nice fit for your track tastes!
OP
OP

I had the PPF done locally in Iowa before the drive. They did entire front, hood, fenders, bumper, rockers front to back and then had side windows and rear window tinted. Overall, excellent work. I had seen their work on a prior trip and thought I'd just have it done before the trip.

See above, the reason for the unsteady freeway tracking is that the car came with 1/8" TOE OUT. Makes the car really unstable. Factory alignment should be just a bit toe in.
OP
OP Have a new Mach 1 waiting to be picked up at Granger- should I have the alignment checked by service before the truck gets there
I also found Granger from this forum- was an easy deal as car was just sitting there and timing is every thing. Called on a Monday and car was paid for on Tuesday.
I ordered a new Bronco here in Florida a year and a half ago- no car in sight- want one but looks like I will get a Land rover Defender instead,
Last edited: Nov 14, 2021
OP
OP

It could be my alignment was a one-off. Of course if more people are experiencing it then might be worth a check on an alignment rack.
When you put the steering wheel completely straight and look at the front wheels standing over the fender on my car it was obvious the fronts of the tires were out and the rears of the tires were in. I then measured with toe plates and found the front end to be 1/8" toe out. That's a lot, when I ran toe out on other cars you would shoot for 1/16" out max. (total toe). I think that perhaps the S550 doesn't like toe out at all give my experience.
OP
OP