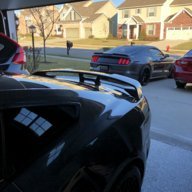 The correct part number, and only option as of this writing, is :

Important - If you have an 18 GT with the coyote ARP Flywheel bolt kit you NEED to read the warning I placed in bold at the bottom of this thread!

I've run into a dilemma you may have solved already. I'm looking for the right bolts for the 2018 flywheel to crankshaft.

The Short Version - what bolts are you using to install new flywheels to 2018+ Mustang GT's?

The Long Version - on how I got to asking this question here and why - tons of people have gone McLeod or Mantic with flywheel on these 18+ cars I'm sure. There's either a bolt I need to use - or possibly a scary situation - if there's no readily available bolt to use - are shops reusing the stock bolts which are torque to yield style?

I ordered a Mantic clutch kit which was supposed to come with all needed hardware. It didn't have any flywheel bolts in the kit (or throw-out bearing but that's no longer included in the 2018 kits it seems.) I contacted my vendor who put me in touch with the Mantic rep who told me the 18 kits don't have the hardware in them for the flywheel and that the US and Australia don't have the bolts to include or send me. He also remembered off-hand that the bolts on an 18 seemed longer than 11-17 cars based on what he had seen but didn't have the lengths etc immediately available when I was talking to him. He wasn't sure if ARP might be an alternative for the application. He suggested ordering 8 OEM bolts to use and just asked me to send them the receipt to take care of it. I reached out to my vendor and let him know this.

Based on his recommendation, I called Tasca, gave them my VIN number and found the flywheel bolt part number to be JR3Z-6379-A, Bolt - Hex.Head x 8 for like $9.28. This plus 2-day shipping (since they have to be special ordered from somewhere else to them and then shipped to me) ended up being $35.69. I also checked local dealers within 200 miles and no one has them. So I asked Tasca - is this bolt listed for the 2018 the same as the 11-17 just for comparison purposes. He ran the number and found it to be the same as the 11-17 cars in his search, optimistically indicating that bolts are the same for 11-18.

I thought, "maybe this is a good thing." If they're indeed the same, then the ARP fasteners could work after all, right? Since there were no immediate replacements for the bolts that weren't in my kit, Mantic and my vendor worked it out and my vendor sent a set of the ARP fasteners since they're purported to be the same length by Tasca's part reference. I figure if they're wrong length, I can mail them back and just wait on the OEM's to arrive, assuming those will be correct.

So I pull my stock flywheel bolts and it's obvious they are much longer than the ARP. I mike them both and there's a 0.4" difference in threaded length between them. Not even close. So I mic the flywheel flanges to see if maybe one flywheel is thicker or something- they're 0.72" +/- .01" - nearly identical. I also mike the bore of the Mantic flywheel and find it to be just under 1" diameter (0.9965 at the top of the bore).

Since ARP bolt kit for the 11-17 (part #156-2801) calls for a 12-pt 3/4" socket to drive the bolts, I check my set. My thin-walled Craftsman socket of that type is just a tad too thick to fit the bore of the Mantic flywheel at the top. I think there's a MAC socket that's 15/16" thick I can get for about $29 plus tax/shipping that might work, if the hole doesn't narrow as it deepens (my mike can't check that deep of a recess to be sure.) So it doesn't appear - on the surface - that the ARP fasteners are going to be a viable option; at least not this kit.

So - what does everyone use for this job? I'm not the only guy to install a flywheel on the 18+ cars for sure - the 18 cars were being delivered at the end of 2017 so the R&D is done and parts are made surely by now being February of 2019. Is there a different ARP kit? Lowe's? OEM? Which OEM bolt is correct? I'm really concerned the bolts that arrive are going to be shorter like an 11-17 now, but I won't know till they ship them next week some time.

I really, and I mean REALLY hope that folks aren't reusing the stock torque to yield bolts on such a critical rotating part of the drive train like this - but maybe that's the answer? I don't know - I'd like new quality fasteners for some peace of mind the clutch won't be coming through the vehicle's interior coming off the line.

Any help is appreciated - I'll try to add some pictures of the bolts for comparison that I have from my phone since it's easier that way once I post up.

Update: I posted one last picture showing how much thread would protrude through the flywheel to bolt up to the crank. There's also a metal crank sensor trigger wheel plate between the flywheel and the crankshaft on the 2018 that is 0.1" thick, so it would actually be less than what you see (visible thread is about .26", with the trigger plate figured in, thread engagement would only be 0.16" with ARP bolts.

I really hope none of you who have 18's and had a shop install it have this ARP bolt kit installed. There's next to no thread engagement with them! (The depth of the hole into the crank to accept bolts -including the trigger plate - is about 0.9" for comparison.) 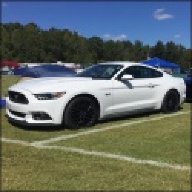 Did you ever sort this out?

It sounds to me like 2018+ Gen 3 Coyote engines with aftermarket flywheels must use a set of brand-new OEM Ford flywheel bolts, and install them with a T55 Torx bit?

I bought a Tremec T56 Magnum transmission, and Tilton ST-246 twin-disc clutch (comes with chromoly flywheel) for my 2019 Gen 3 Coyote engine. Tilton sent what appears to be ARP flywheel bolts with their kit, but I’ll measure before using. They look fairly short, maybe 1” long like the ARP 156-2801 flywheel bolts for 11-17 Coyote engines.
2017 GT Premium Performance Pack