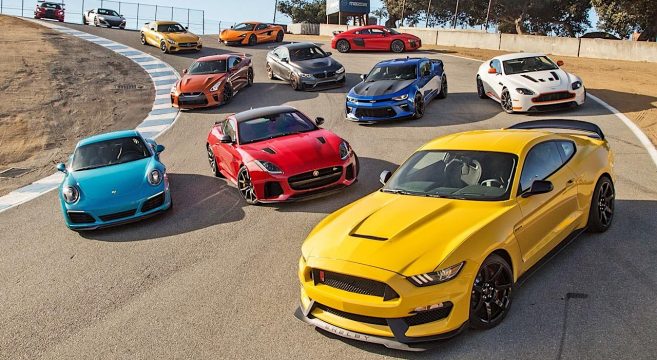 Every year Motor Trend rounds up a group of the world’s best sports cars, supercars and pony cars to compete for its Best Driver’s Car title.

This year, 12 choice vehicles including the 2016 Shelby GT350R were selected to see which was the most rewarding and fun to drive car out of the field.

As Motor Trend explains, its Best Driver’s Car may not necessarily be the quickest in a straight line or pull the most g on the figure eight, but it is about being the ultimate automotive extension of the driver.

Motor Trend editors and hosts Jason Cammisa, Jonny Lieberman, and pro driver Randy Pobst put the 12 vehicles through its paces both on the track at Mazda Raceway Laguna Seca and on the canyon roads within Salinas, California.

Randy Post sang the praises of the GT350R, stating:

“Ladies and gentlemen, meet your new Ford Mustang Shelby GT350R sales rep. Buy one. You will not go wrong. I am in love with this car. It just works: the level of control, the balance, the stability without understeer.“

When all was said and done, the Shelby GT350R clearly won the hearts of the MT staff, beating out vehicles two to three times more expensive.

As the second most affordable vehicle in the pack, the GT350R finished runner up to the $220,000 McLaren 570S in the 2016 Motor Trend Best Driver’s Car competition.

Check out Motor Trend’s videos and commentary for its 2016 Best Driver’s Car contest.