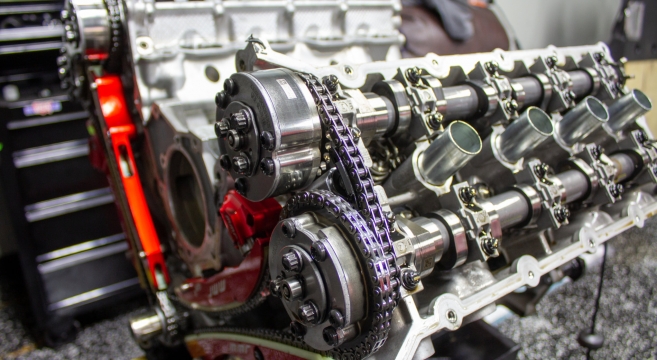 Early last year we featured one GT350 Mustang owner’s plans to build his 5.2-liter Voodoo V8 engine for race use only and after clocking over 40 hours of intensive racing use at the track, M6G member honeybadger (Kevin) gives us another inside look at his plans to refresh his built GT350 engine yet again.

Kevin has documented in detail the extensive work that’s been done to his GT350 motor, including sending his heads to RGR for port/polish and valvetrain upgrades while the shortblock went to MPR Racing Engines. The motor was assembled to race specifications with beefed up parts to minimize rotating mass, friction and to handle extreme heat.

After hitting (and exceeding) Ford’s recommended life hours of an engine built to these specifications, Kevin decided to tear into the engine to assess what needed to be refreshed — noting that the definite modifications would be fresh timing chains, guides, tensioners and valve seals.

Check out what else is planned for this GT350 engine refresh, part dieu.