Cobra Jet said:
While the failures are unfortunate, I see a lot of comments telling the OP to contact Michelin.

No offense to the OP - but as pointed out, the OP is buying OLD tires with date codes that are in excess of 3+ years, without any additional knowledge of how those tires were stored or even why some Seller on eBay ended up with quantities of overstock and is selling them at “bargain” prices.

The eBay seller probably ended up with overstock because of the date codes - it is a liability for ANY tire shop or normal retailer to sell tires that have over aged date codes, period. We’re not talking date codes that are 6mos to 1 year, we’re talking date codes in excess of 3 years. Also some of these eBay Sellers buy bulk lots of manufacturing defects and sell them at bargain prices as well (and they’re not going to tell the public what they are selling is defects).

Let’s take the scenario one step further:
OP bought said eBay bargain tires, is out on a public highway at cruising speeds (65mph+) and has a catastrophic tire failure resulting in a wreck where he has maybe injured himself and/or caused property damages and injuries to someone else. He can’t go after Michelin because he knowingly bought aged tires and took the risk driving on them. Even IF the tires were defective from the manufacturer, he still bought aged tires from a non-retail tire source and drove on them, fully knowing they had aged date codes on the sidewalls.

Point being - Michelin isn‘t going to back any warranty or even a manufacturing defect claim because these tires were not sold by a valid retailer and the date codes alone are well beyond their “prime” as being warrantable. Their printed Warranty also only applies if the tires were purchased from a Retailer and is also null and void if the tires were used in competition or track related events. If an accident scenario played out like the example, the OP would have no legal suit or recourse against Michelin either.

Reaching out to Michelin is pointless.

Sure there’s a ton of people who do the same with buying “NOS” tires, but look at the risk.

Wow. Reaching out to Michelin makes a huge amount of sense. They're a company that takes care of their customers because it's good business.

The tire in question left Michelin bound for one of two destinations - an automotive OEM or the retail channel. The warranties are different between them, but both channels have warranties.

The fact that the tire ultimately ended up on Ebay is irrelevant. It's less than six years old, which is the best-before date for installing new tires. In short, it's still a new tire as far as Michelin is concerned. If it was mis-manufactured, they want the customer on a new one as soon as possible.

So, calling Michelin's 800 number and explaining what happened makes a ton of sense. What's the worst they can do? Say no. So there's nothing to lose by calling. 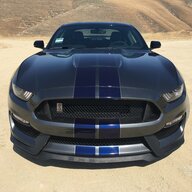 Wouldn’t that be something if Michelin themselves were the ones selling these old stock tires to said eBay seller?
I can see both sides of this, pretty interesting for sure.
This whole proper storage thing is what? What is in fact proper storage? I have yet to see any tire store take “special” precautions in storing tires. All I’ve ever seen is racks of tires a story or two high, nothing special about that at all. The tires live in the same area as the installers. Granted I live in a part of California that doesn’t get real cold for an extended period of time, maybe it’s different in the northern climates.