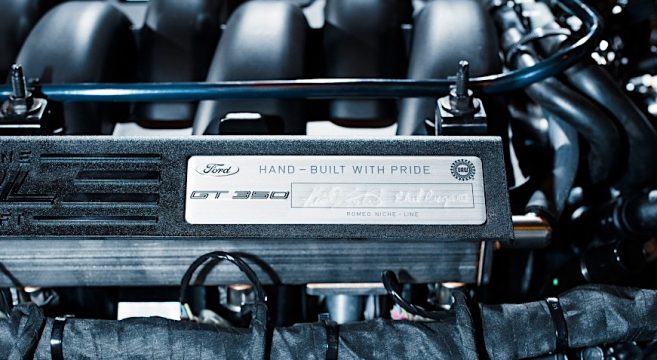 The 5.2-liter flat plane crank engine which is exclusive to the 2015+ Shelby GT350 will be built for another 2 model years, according to workers at Ford’s Romeo Engine Plant.

Sure, you should file this under the category of rumor, as goes for any information not officially confirmed by Ford brass, but also one very likely to be true for several reasons.

As M6G readers will recall, there had previously been revelations found in the UAW documents which noted that the 5.2-liter engine would continue to be built at the Romeo plant, albeit for an unspecified duration into the future.

Now, the latest evidence comes by way of a Facebook post in which one of the niche-line engine builders at the Romeo plant revealed that the plant will continue to build the GT350’s flat plane crank engine until 2020 — which we know to be the tentative timeframe for the start of the next (7th generation) S650 Mustang.

That the GT350 could continue to be sold for the remaining years of the 6th generation S550 may be surprising to some, but we believe it to be a good bet nonetheless.

Ford has gone on record several times assuring that the GT350’s 5.2-liter flat plane crank engine would not be shared with any other vehicle. And this latest rumor suggests an outcome which corroborates information from our own sources, namely, that Ford has decided to extend the hugely popular GT350 and GT350R for the 2018 and 2019 model years in order to meet the demand.

As this reflects a marked shift in the original plans, it should go without saying that market conditions and other factors will continue to impact and potentially alter any current or future offerings from the company.