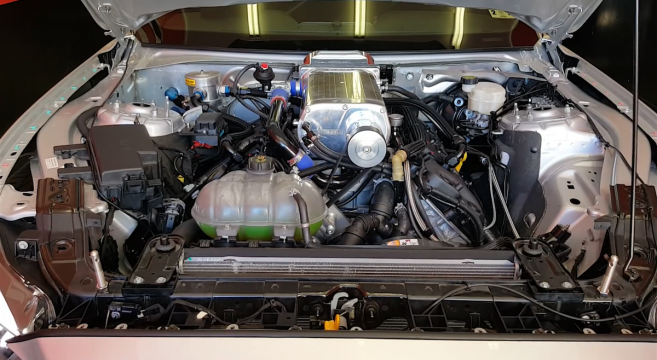 Monumental feats of power in the aftermarket always capture our attention as performance enthusiasts and a perennial stalwart in this category is the Ford Mustang.

The S550 Mustang is only in its third model year and already the highest horsepower supercharged Mustang GT had been taken to 1240 horsepower, until now. The bar has just been raised even higher by Boost Works and Kenne Bell, who reset their own record last week.

To achieve such massive power, the Boost Works team had to partially open up the blower’s bypass valve and upgrade to a larger pulley. With Ignite Red 114 octane racing fuel in its belly the beast laid down a stunning 1,318 WHP and 1,028 lbs-ft of torque at 31 psi of boost.

If it isn’t obvious yet, this vehicle isn’t just going to sit idle with all of that power. In fact the Boost Works squad just ran it in the wannaGOFAST Georgia Half-Mile Shootout this past weekend.

Check out footage of the supercharged 2015 Mustang GT horsepower current record holder (and dyno pull video) in the forums.