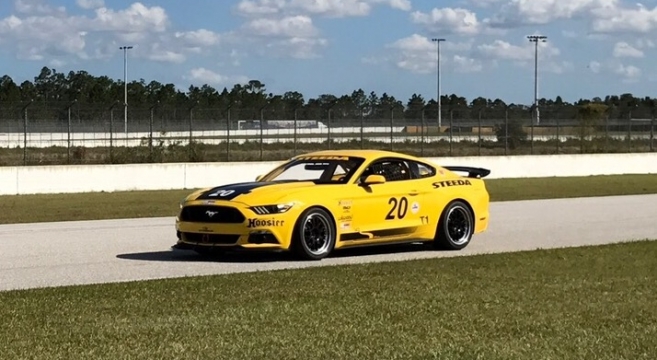 Orlando, who drove both sprint races, qualified the yellow and black Number 20 Ford on pole in both twin South Atlantic Road Race Championships events. Admittedly rusty, he struggled at the start of the first race and spun on the second lap—but despite having not competed in over two years, he gathered the Mustang and fought his way back to grab a second-place podium finish.

“It was great to get back in competition,” said Orlando. “We’ve worked diligently to produce a Mustang with greatly enhanced handling performance, but one that’s easy to drive at the limit. Our Q-series Mustangs are balanced and do well on the street or the track. In fact, one of the reasons we race is to show enthusiasts they can have the very best parts whether they drive on the street or track,” Orlando added. Orlando was better prepared for the second sprint race. He rocketed to a great start and despite a strong challenge from the Number 52 BMW M3 (see photo), he was able to maintain the lead and take the victory. “It was a challenge staying ahead of the supercharged M3,” stated Orlando, “However, the Steeda Mustang prevailed and it was really exciting to take a win. Our Q500R utilizes a tuned 5.0L Coyote engine, a stock transmission and our full Steeda G-Trac suspension, with Pro Action adjustable shocks.

It’s stuff you can buy and adapt easily to any S550 Mustang. This system really enhances performance and we offer a few levels depending on your demands.” The Steeda team concluded the weekend running the 1.5-hour ECR Enduro, where Orlando took his third pole of the weekend. SCCA regular and Steeda team driver, Glen Vitale, took the first stint, and he made the most of Orlando’s P1 starting position.

Read more about Steeda Autosports victory at PBIR in the forums.