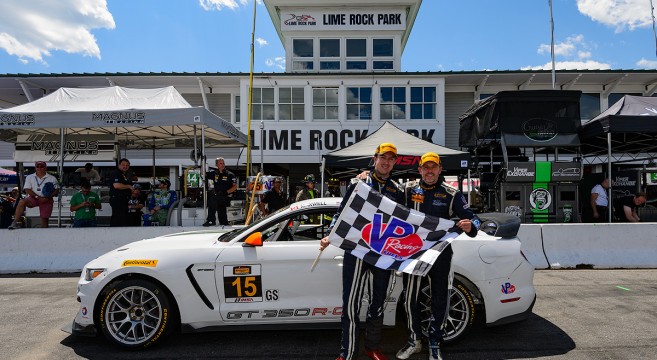 The Ford Shelby GT350R-C won its second race in three weeks with the No. 15 Multimatic team of Scott Maxwell and Billy Johnson.

With the win at Lime Rock Park the duo maintains the lead in Continental Tire SportsCar Challenge championship points.

This third win of the year for No. 15 came on the strength of their swift pit stops and effective tire management.

“Our pit stops were superb,” Maxwell said. “Billy and I didn’t make any mistakes, but really, we won it in the pits today. We gained five or six seconds each time (we stopped). That was enough to win the race.”

After earning five seconds on the competition on stop No. 1, the No. 15 team took only two tires on the last stop to pick up even more time.

The other Ford Shelby GT350R-C team — the No. 76 AERO Advanced Paint Technology/Children’s Tumor Foundation vehicle started p3 and showed pace, but drivers Paul Holton and Pierre Kleinubing were sidelined when the car suffered a broken rear control arm. They finished seventh in class, 87 laps down.

Read more about the Shelby GT350R-C win at Lime Rock.