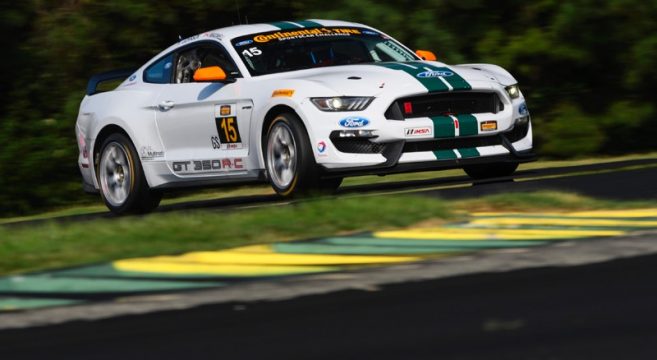 This despite strong rain and winds that eventually red flagged the race just over 30 minutes into the 2-hour, 40 minute event, but not before causing Scott Maxwell to spin on dry tires in his No. 15 vehicle early in the race.

He recovered quickly with little damage to the car and remained on the lead lap as the race first went under yellow, then red, with Paul Holton in the No. 76 Ford Shelby GT350R-C at the front of the pack.

A blazing fast pit stop gave Multimatic the lead for the eventual restart, with Billy Johnson now behind the wheel of the No. 15 and 45 minutes left on the clock. Johnson drifted around a corner into p2, yielding the lead, but held on for the second step on the podium and vital points toward the team’s defense of their lead in the Continental Tire SportsCar Challenge points.

“That was a strange, strange one,” Maxwell said. “It’s a bit of a blur. In the end, for what we set out to do today, it was a good one for us. We wanted to go out and get points. Now with just two races to go, it’s important for us to maintain our lead in the championship at every race. We’re down to the last two races. We couldn’t afford a DNF or a bad run and Billy did a good job there at the end to hold off the (third-place finisher).”

Read more about the Shelby GT350R-C podium finish at VIR this weekend.