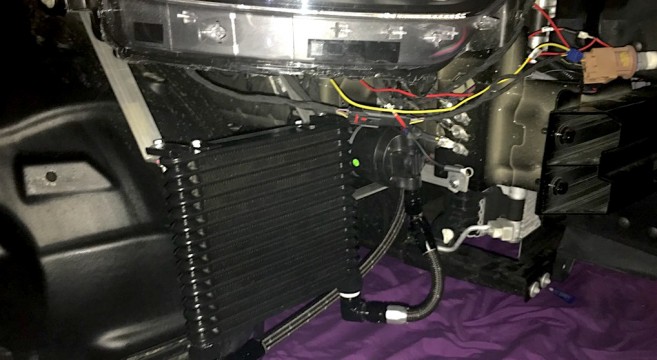 As you know by now, the 2017 GT350 will come standard with transmission and differential coolers which currently only comes with the track package.

Many regular readers of the forums know that some 2015-16 GT350 base and technology package owners have had their vehicles encounter “limp mode” during varying degrees of track use in which the GT350 ECU effectively shuts down the vehicle by limiting revs in order to prevent the transmission from overheating.

M6G member SVTDSM (Steve), owner of a 2016 GT350 with tech pack took matters into his own hands and was the first on the forums to install the transmission cooler himself after booking two track days in early April.

To accomplish this, he ordered an aluminum oil cooler from CX Racing with plans to mount the cooler without any cutting or drilling and mounted as close to the OEM location of the cooler on the track package and GT350R vehicles as possible.

See this transmission cooler (and pump) installation on SVTDSM’s 2016 Shelby GT350 and stay tuned to see the real world testing during its scheduled track session this weekend.