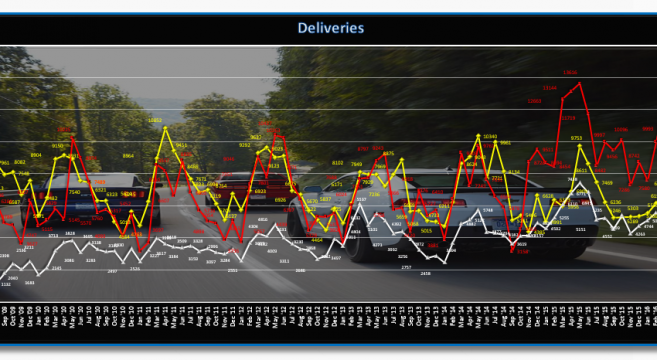 The books have closed on another month and the June 2016 Mustang sales data points to another solid performance by the S550 Mustang.

The Mustang widened the gap between it and its main competition by selling 9,776 vehicles in June giving it almost 50% of the pony car market share so far this year.

Now in the third model year of its current design and specifications and with a refresh on the horizon, the Mustang has predictably experienced a slight decline in sales compared to the year prior, with June sales down 17-percent compared to the same month last year.

Nevertheless, it fared much better than its domestic rivals Camaro and Challenger which respectively sold 4,969 and 5,479 units each.

We are now at the mid-year point and Ford Mustang year-to-date sales stand at 62,965 compared to 36,834 for the Chevrolet Camaro and 34,607 for the Dodge Challenger.

See all the June 2016 Mustang sales stats and graphs in the forums.