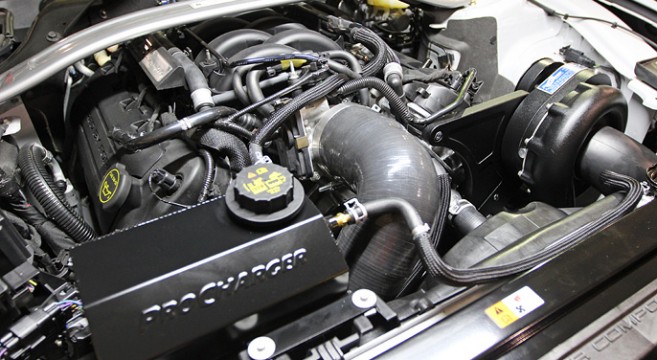 The 5.2-liter flat plane crank V8 engine in 2016 Shelby GT350 is proudly advertised by Ford as its most powerful naturally aspirated production engine ever.

In the world of Mustang however, the best from the factory is rarely good enough and the crew at ProCharger have set out to prove that the high-revving Voodoo engine is better supercharged.

With the GT350 ProCharger tuner kit and full kits a mere 4 to 6 weeks from being released, GT350 owners can look forward to a new supercharger kit that promises “no power fade consistently lap after lap on the track.”

For many GT350 owners heat management will be a major concern and to this ProCharger assures they have developed an air-to-air intercooler designed specifically for the GT350’s unique front fascia which promises “maximum cooling and perfect OEM fit and finish.”

Not surprisingly some Mustang6G members are already on the list in hopes of being one of the first to install the kit which they tell us will run moderate boost level (under 10 PSI) and on 93 octane pump gas.

See the GT350 ProCharger pre-release details in the forums.