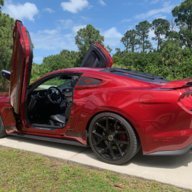 This is my second go around with the EcoBoost platform. My first was a 2015 EcoBoost Base w/PP purchased in January of 2015. I do my research on everything I put on my cars, always weighing performance, function, appearance, quality, price, vendor support/service, and compatibility with other modifications. I ended up going with the Corsa 3" downpipe and MBRP 3" Race cat-back on this first EcoBoost. By the time it ended up totaled in an accident (not my fault) in May of 2018, I had almost 15K of modifications on the car with another 6k planned. Heartbroken, I replaced it with a 2018 EcoBoost Premium 201A. I kept a detailed build list of everything I did and put on that car, so used that as my starting point for my 2018 build. When I got to the exhaust this past month and researched my options, the CVF downpipe caught my eye. It looked very comparable to the Corsa I used on my 2015 and for much less! The only problem I could saw with their product was that the 3" to 3" adapter wasn't yet available. This wasn't insurmountable to me, and would still end up costing less since I planned on welding V-Band flanges between the down pipe and cat-back anyway to make it easy to adjust and drop the exhaust when needed. So after talking back and forth with the CVF team, who are extremely friendly and helpful by the way, I was convinced this was the product for me. When researching the exhaust, I still ended up going with MBRP as best bank for the buck! Expensive does not mean better in all cases.

I bought the CVF down pipe and when it arrived and was unboxed, I was extremely impressed with the quality of the welds and the brushed appearance, this thing is a work of art! I proceeded to cut the reducer off the downpipe adapter and welded a piece of 3" straight pipe about 7" long in its place. I then cut the reducer from the MBRP exhaust. I have never been a fan of the butt connecter like that used on the OEM exhaust, so I opted to weld V-Band flanges to the end of the down pipe adapter and the beginning of the cat-back to make future install/uninstall and rotational adjustments a very simple matter.

I uninstalled my OEM down pipe and exhaust in about an hour. One thing I did that made this super easy was the day before, first thing in the morning I sprayed the turbo studs with PB Blaster, then again that evening after work. The next day when it came time to take it all off, I hit it again and I had no troubles with removing the nuts from the studs like you hear about so often. The CVF down pipe took about 30 minutes to install and no problems. I did take the time to make sure clearances between the rear of the down pipe and the body were sufficient to allow for flexing during normal operation. With the V-Band in place, the exhaust install was a cakewalk.

The first time startup was awesome! While I honestly can't tell you how it would change the sound of an OEM exhaust, this thing paired with a 3" race exhaust is just mean. The exhaust note is actually surprisingly deep and at an idle or cruise, isn't extremely obnoxious or loud. But put a bit of boost to it, this thing turns from Dr Jekyll into Mr Hyde. It does NOT have that high pitched ricer drone/tone that so many aftermarket EcoBoost exhausts systems have. If I had wanted my Mustang to sound like a Honda, I would have bought one.

Without a tune the low-end power noticeably increased and at the top-end where normally there is a sharp drop-off of power is not nearly as pronounced. With a tune, this most definitely woke up the EcoBeast! The only negative and that is the nature with most of these downpipes, is that it does throw the CEL for O2. I ended up buying an O2 restrictor adapter and that ended up fixing the problem, pre-tune, so if you are one of those that refuse to tune due to warranty, not a problem.

In conclusion, the CVF 3" Catted Downpipe is a functional and beautiful product, great bang for the buck, backed by a solid, conscientious, and friendly design and sales group. 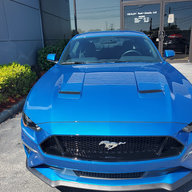