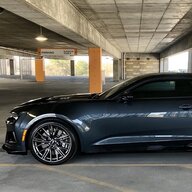 Has anyone had a C7 Z06? It's been on my bucket list for a long time as my obtainable "dream car"...but I haven't driven one. I do like the styling and exterior design better than the C8. Has anyone had one that can share the nitty gritty with me of living with one day to day? How's reliability? Have there been any known common troubles with the car? If so, were those resolved in newer models? I'm not talking about the early models overheating on the track, because I don't track my cars. More along the lines of issues with durability or reliability, any common problems, etc.

Are they mod friendly, i.e., will an intake and smaller pulley alone add considerable power (say, a bump to 700 crank hp)?

I've heard the paddle response on the A8 is terrible, so I'm leaning toward M7 because of that, even though it's slightly slower accelerating due to the time it takes to shift your own gears...any thoughts on that? I currently have the A10 in my Mustang GT and don't mind the paddle response under moderate or heavy throttle (they are slightly annoying and slow to respond under light throttle).

According to the magazines C7 Z06s trap about 126-127 mph in the 1/4 mile. Compared to the A10 GT of 119 mph (MT) and 120 mph (C&D)...Do they feel a little quicker, or a LOT quicker, than a stock A10 GT or lightly modified A10 GT PP1? I would think at their power to weight ratio (~5.45 lbs/hp, nearly the same as a '20 GT500 CFTP), 130+ mph trap speeds would be achievable and expected. What have you seen C7 Z06s run in person? My GT has bolt ons and is measurably quicker than stock (I've measured about 8-9% quicker acceleration once traction is no longer an issue with my current mods and lightening efforts).
2021 Camaro ZL1
You must log in or register to reply here.
Share:
Facebook Twitter Reddit WhatsApp Email Link