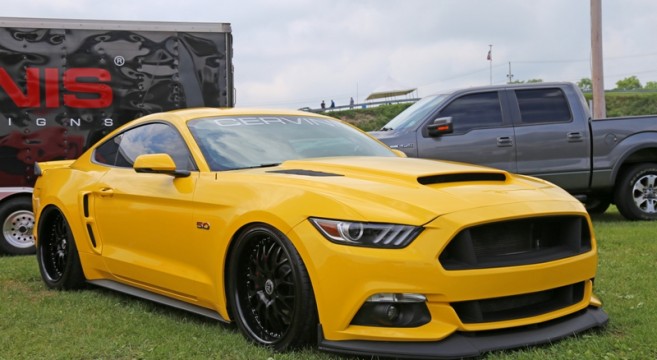 During the Ford Nationals two weekends ago, Cervini’s Auto Designs revealed a few of its new S550 “Stalker” components that were showcased on a 2015 Mustang that we’ve featured in the past.

The Cervini’s Stalker hood features a large center scoop with a black powder coated hexagon screen and optional ram air duct to force air directly to most major cold air intakes. The functional heat extractors to the sides of the scoop remain intact with a built-in drainage system that prevents water from coming into contact with the engine’s electronics.

Josh’s vehicle also gave us our first look at the Stalker side scoops which features dual black powder coated screened openings that flow nicely with the aggressive modern styling of the hood. Cervini’s tells us the installation of the side scoops is quick and easy with the use of double-sided tape.

Last but not least the back side is adorned by the eye-catching Stalker wing — a three piece rear spoiler with modern race-inspired styling. Available for both the fastback and convertible S550, the wing, like the other Stalker components ships unpainted but can be upgraded to a fully painted finish in any S550 Mustang Ford paint code.

Cervini’s has plans to offer a full Stalker-series front end, side skirts, and rear valence so stay tuned for more developments.

In the meantime, be sure to check out the Cervini’s Stalker S550 hood, side scoops and rear wing in the forums.