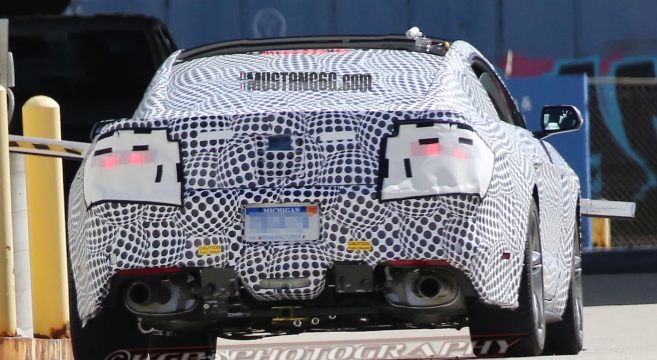 After months of waiting, we finally caught our first glimpse at the updated 2018 Mustang mid-cycle refresh!

The 2018 Mustang prototype was spotted as it came out of Ford’s facilities during one of its first public road tests in Dearborn, Michigan.

Although the near-full body heavy camouflage prevents a clearer look at the extent of aesthetic changes, the heavy disguise suggests that we may see new headlights, revised front fascia and a reshaped front grille.

At a glance the refreshed design appears to have shaved down the slight hood bulge seen on the 2015-17 Mustang which has been met with mixed reviews from those that have experienced some visibility issues as a result of this design feature. If this change is made it could make for a slightly more flat and leveled hood that may improve visibility. Relatedly, the hood seems to have been lowered by as much as an inch.

The rear of the vehicle is also fully disguised with only a hint of the sequential tri-bar taillights indicating we may see a light treatment and a revised rear bumper that is only partially in place on this 2018 Mustang prototype.

The prototype is also seen wearing what appear to be 2010-12 GT500 wheels used for testing purposes and unlikely to be seen on the production vehicle.

The mid-cycle refresh is expected sometime mid-next year with the public reveal in early 2017, possibly at the next Detroit Auto Show.

Check out the first look at the updated 2018 Mustang mid-cycle refresh in the forums.