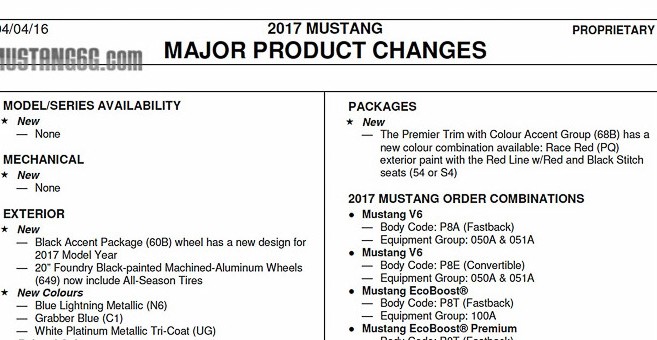 Here is your first look at the 2017 Mustang order guide for the GT, EcoBoost and V6 models!

Although the opening of the order banks for the 2017 Mustang has not yet been officially announced, the release of the 2017 order guides means you can now begin planning your retail orders in preparation.

As we reported back in January, and which regular Mustang6G readers know, the 2017 model year brings with it new colors Lightning Blue, Grabber Blue and White Platinum Metallic to replace outgoing colors Deep Impact Blue, Competition Orange, Guard and Kona Blue (an odd mention since the latter was only offered on the 50 Years Limited Edition 2015 Mustang).

It should come as little surprise that with a major refresh looming for the 2018 model, the latest order guide revision indicates there are only a few minor changes that have been added for the 2017 Mustang.

This includes a new 19-inch Ebony Black-Painted Aluminum wheel design included in the Black Accent Package (60B) and the ability to order the Red Line option with red-and-black stitch seats with the Race Red exterior paint choice.

However, it appears that not all the changes will add new features. When comparing the latest order guide revision to one dated April 4, 2016, there has been language removed that indicates the 2017 Mustang GT may no longer come with integrated turn signals in the hood vents — a feature introduced with the 2016 model year. No official confirmation of this has been made so stay tuned as we glean more from the order guides and other dealer-sourced information.

2017 Mustang pricing has yet to be confirmed except for rumblings that the 2017 Shelby GT350 base pricing will start at $56,495. However, at least one M6G member has been informed by a Ford dealership on the East Coast that there will be strong cash-back incentives on 2016 Mustangs.

See the full 2017 Mustang order guide in the forums.

*Thanks to M6G member HizilBullet for posting.