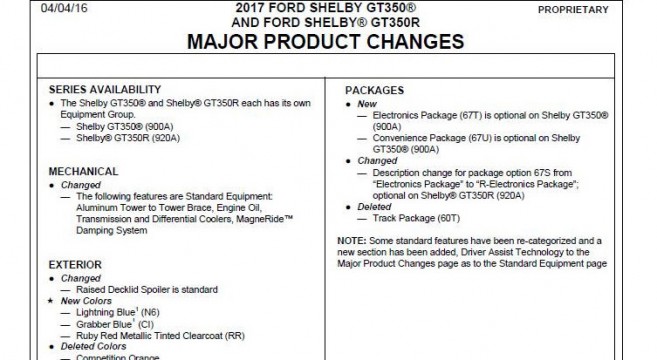 As we first announced back in January, production of the Shelby GT350 is alive and well and continues into the 2017 model year with both standard and R versions.

Mustang6G has your first look at the 2017 GT350 and GT350R order guide to show what changes and new features are available for the next installment.

First mentioned in the Ford dealer eSourcebook, the order guide confirms that the 2017 Shelby GT350 will no longer have the track package available as an option, but this is immaterial as most of the performance bits from the track package will now be incorporated as standard on the vehicle. This includes the aluminum tower-to-tower brace, engine oil, transmission and differential coolers and the MagneRide Damping System.

The R-Electronics Package for the GT350R now adds 9-speaker audio where it previously only offered up to seven speakers.

As we showed you in our recent spy photos, the new Lightning Blue paint option is available for the 2017 GT350 and GT350R. Better yet, we’ve now learned through this order guide that Lightning Blue is also available as an over-the-top stripes option.