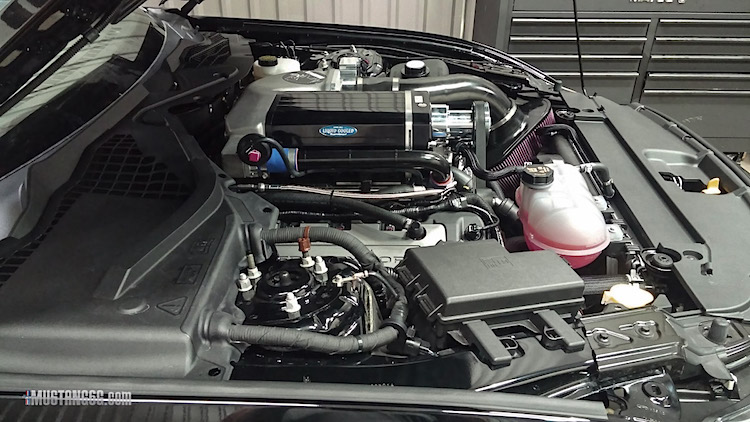 Ever since Ford announced the new S550 Mustang platform, and pictures started to circulate, there has been a huge buzz across the tuner industry. That’s typically the effect when news of a new Mustang comes out. In Katy, TX, the guys over at Boost Works were chomping at the bit to get their 2015 GT, as they had big plans in store for the new pony.

Working with Kenne Bell and McLeod Clutch, they planned to be the first tuner shop in the country to successfully build and tune a supercharged 2015 GT.

“We were hell bent on being first,” Travis Burelle of Boost Works explained. “Every tuner shop out there wants to hit that first homerun ball. We looked at that and said, ‘Hey, let’s go get a car and actually do it.’ Once we came up with a game plan, David and the crew over at Kenne Bell worked hand in hand with us to get parts overnighted. We spent hours going back and forth over the phone to figure out clearances, machining processes, and modifications necessary to make the S197 kit work on the S550 platform.” Kenne Bell is in the process of building a S550 specific kit, but in the meantime, Boost Works has developed an install kit that allows the S197 kit to bolt right up.

After several weeks of hard work, the car was strapped to the rollers. Tuning proved to be a challenge, but Jason Haynes (of the Tuning School) worked out the bugs. With its Kenne Bell 3.6LC Mammoth Supercharger Kit, the car responded with an impressive 653whp/507wtq dyno pull at 17 degrees of timing and very conservative 11:1 A/F ratio.  [see all photos].

“We knew going in that tuning was going to be a challenge,” Travis explained. “After talking with Eric Brookes (HP Tuners), and Tim Roi (SCT), we learned that the tuning strategy was a bit different, and the number of tables had doubled in some areas. Luckily, we employ one of the better tuners in the game. Jason came over from The Tuning School and started working with us this year. He’s been a HUGE asset, and a big reason why we’ve been so successful. He’s not a big name in the Ford game, but you’re going to hear more about him very quickly.”

Armed with 2 laptops, boxes of pizza, and energy drinks, smoke soon poured out of Jason’s ears while the data was crunched and the car was dialed in. “Back to back 655whp and 653whp pulls told us that we were done for now. At 11.93psi max boost, the power output is only limited by the stock throttle body. We were lacking a few things in the tuning tables to be able to get the big 168mm Kenne Bell oval TB dialed in, but that’ll be coming soon. We expect power output to rise into the 700whp range on higher octane fuel.”

To support the added grunt, Boost Works teamed up with McLeod and Fidanza to get a RST Twin Disc system built and installed in the car. “This setup has worked well for us in the past. McLeod makes a solid twin disc, and we won’t run anything else if we can avoid it. The install is pretty straight forward, and the twin disc allows the car to retain stock-like drive-ability,” Travis explained.

The car also breathes through a 2.75″ exhaust system, which Travis fabricated from mandrel bends. The cats have been removed, and a 2 bolt flange had been welded in place on the driver’s side to mimic the passenger side manifold. “Ford decided to build the cat right into the manifold, making it all one piece. This was only done on the driver’s side. The passenger side is identical to the S197 factory manifold. So, we simply cut the cat off, and TIG welded a 2 bolt flange to the collector on the driver’s side,” Travis explained. “We built a 2.75″ H-pipe, using stainless mandrel bends, and the resonator has been removed. The only factory pieces left are the 2.5″ over-axle tubes, and factory mufflers.”

Future plans for the car include cracking the 9 second barrier, and a trip to the Texas Mile in March, where Boost Works is a sponsor. A sleeved/built long block is also in the works. “We want to go out and set the bar in terms of S550 performance/parts. Thanks to our crew here at Boost Works, we’ve been able get a big jump on everyone. Curt Howell, and Jason Haynes have been a huge part of making this happen. We have a solid team, and look forward to what 2015 brings. Stay tuned!”

Check out more details and all the photos HERE.