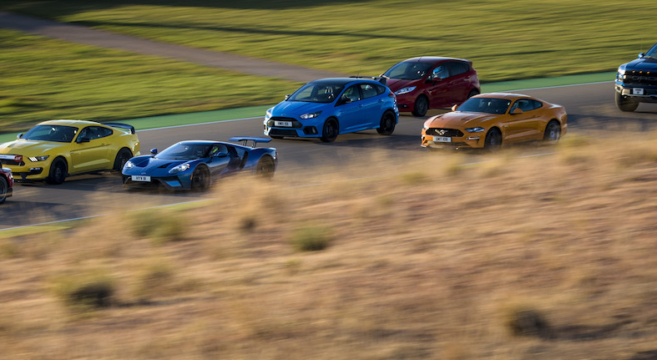 It’s the ultimate track showdown: Eight models from the Ford Performance global line-up on a circuit together for the very first time, pushed to their limits by the Ford Chip Ganassi Racing Team drivers.

The sequence was filmed in partnership with Castrol Edge during a tight four-hour window, during which all eight Ford Chip Ganassi Racing Team drivers took time-out from a pre-season Ford GT race car tyre test to shoot.

Andy Priaulx, Harry Tincknell, Olivier Pla and Stefan Mücke from the World Endurance Championship, and Dirk Müller, Joey Hand, Richard Westbrook and Ryan Briscoe from the IMSA WeatherTech SportsCar Championship, each took the wheel of a Ford Performance model – setting off at intervals and culminating in an eight-way battle through the final bends and finish straight.

Check out the video inside to find out how close the 2018 Mustang GT and Mustang GT350R came to the blistering time by the Le Mans-winning Ford GT race car.