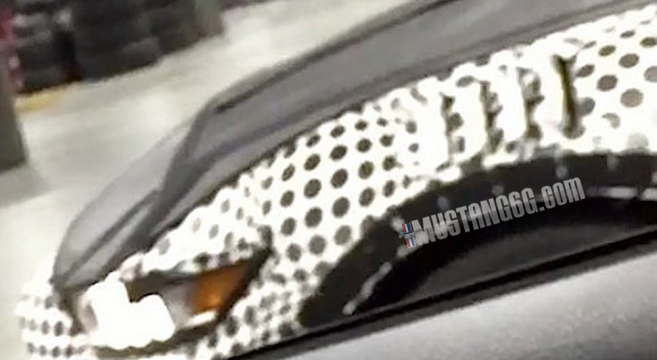 It’s grown very quiet on the halo Mustang news front but new photos have surfaced which show a very interesting feature not seen on previous Mustangs.

The candid photos show a camouflaged mule with a GT350 silhouette, much like one of the variants seen last summer, with the entire front clip covered in heavy cladding. All except in the last photo which provides a (blurry) glimpse of the vehicle with the front cladding removed and four louvered vents/gills on the front wheel arch visible through the black and white vinyl wrap — a feature not found on any known S550 Mustang variant to date and presumably used to create more frontal downforce at high speeds or even to draw in cold air for cooling purposes.

One might conclude that this is simply a revised GT350, but for the fact that Ford previously informed dealerships that the 2018 GT350 will have the same “functional, exterior and interior content” as the 2017 model.

This leads us to the possibility that this could be an early 2019 GT500 mule (or a halo Mustang by another name), or a very aggressively styled Mach 1. Based on the big aero effects, carbon wheels, large racing wing and the underlying GT350 donor vehicle, we’re inclined to believe this is the next halo Mustang in the making.

We know Ford is keeping this one close to the vest, but stay tuned. We may catch these yet.

For now, check out these new spy photos of this high-performance (GT500?) Mustang prototype spotted with wheel arch louvers.