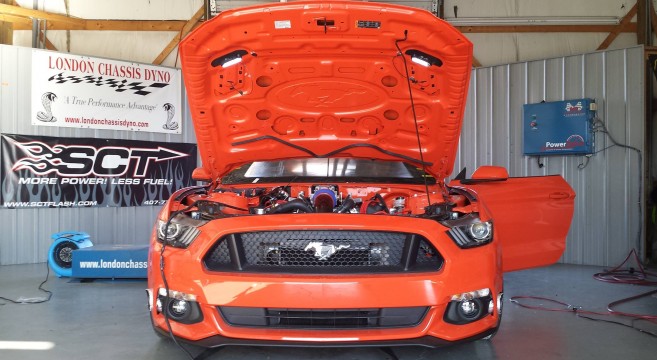 Back in 2013, soon after the 2015 Mustang first debuted, then-Mustang Chief Engineer Dave Pericak remarked that the 5.8-liter Trinity engine from the Shelby GT500 would fit, but that modifications would have to be made in order to do so.

It took over two and a half years for it to happen, but the folks at Weir Racing did just that and took it one step further.

The Weir Racing “Nemesis” 5.8-liter twin turbo 2015 Mustang is said to have fit with relative ease with only the use of a modified 2013-14 GT500 K-memnber and custom steering bits to effectuate the swap — all without the need for any changes to the chassis.

The 5.8L block built engine features a fabricated intake and twin turbos which sit just behind the bumper, helping the beefed up automatic-transmission S550 to literally shred rubber on the dyno at C&C Racecraft/London Chassis Dyno and produce in excess of 900-horsepower to the rear tires running 10psi of boost, according to sources.

The team has big plans to turn up the boost and run the Arkansas Mile in June where it hopes to set a record.