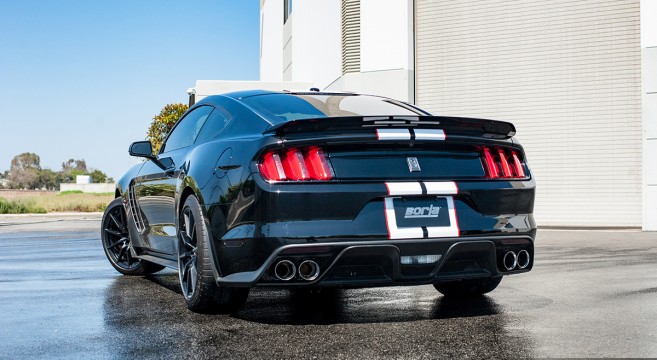 The Borla ATAK catback is a bi-modal exhaust that features the factory exhaust quad tips/bezels and valves for the Selectable Driving Mode.

Weighing 49.6 pounds helps the Borla GT350 catback shed over 13 pounds from the factory exhaust. But the real highlight of this system is in the power gains.

Borla tells us that their new GT350 ATAK catback system picked up an impressive 18 horsepower gain to the wheels. Borla attributes this to the improved design of the exhaust which has been created to maximize airflow, namely its true X-Pipe with a 2.75-inch diameter throughout along with the straight-through muffler design.

M6G member Shadow Man is one of the first to have the Borla exhaust along with long tube headers installed on his 2016 Shelby GT350 and he notes the increased power could be felt through the gears, in part due to the 12-horsepower gain from the headers.

Check out this owner video and stay tuned for the official GT350 Borla exhaust video in the forums.