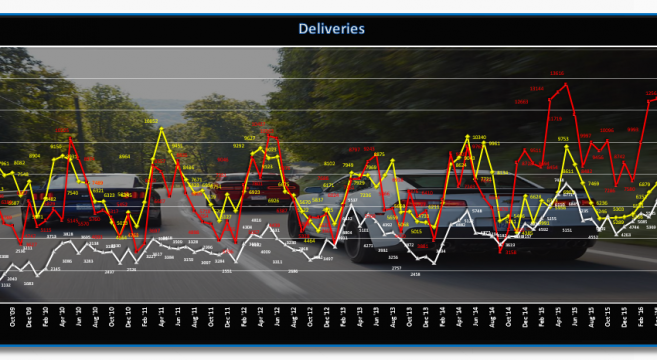 The hot months have begun to cool and with the last full month of summer officially in the bag, so have S550 Mustang sales which simmered as it enters the traditionally slowest sales months of the year.

Ford sold 8,299 Mustangs in August 2016, a decline of 17% from the same month last year. Respectable numbers considering August 2015 had itself seen a 70% increase year-over-year and represented the best August since 2007.

Recent talk and fresh leaks regarding the 2018 Mustang have been accelerating as Mustang fans await FoMoCo’s next refresh of the S550, which no doubt will continue to weigh on sales as we approach its debut early next year.

Until then, the Ford Mustang is still enjoying a comfortable sales lead compared to its competition with Chevrolet selling 5,604 Camaros last month — a yearly decline of 10.1% for the automaker — while Dodge sold 5,262 Challengers for a nearly 5% increase compared to the same time last year.

See the August 2016 Mustang sales data in the forums.