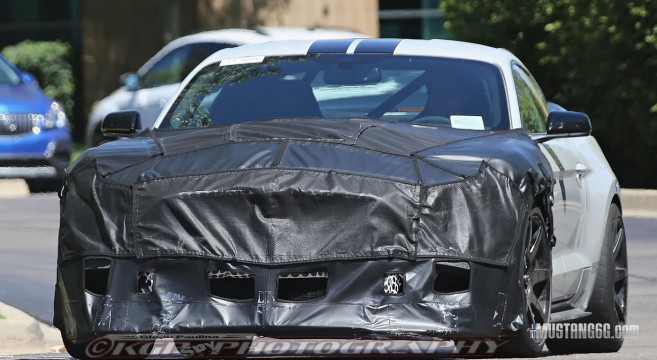 New video (and photos) reportedly showing a 2019 Shelby GT500 Mustang mule has been caught by our photographers as it ran in and out of Ford’s test track.

While many expect the next Shelby GT500 to feature a twin-turbocharged V8, the video provides no audible evidence of a turbo spool or other indications of forced induction although the vehicle was being driven modestly on public roads.

Rather, the sound emanating from the vehicle resembled the current 5.2-liter GT350 or even a more traditional cross-plane version of the Voodoo engine.

With indications that the 2019 GT500 will feature a cross-plane version of the 5.2-liter engine with some sources telling us it will be Eaton-supercharged, this new video perhaps raises more questions than it answers.

What we do know is that the 2019 Shelby GT500 will be a fearsome predator on the streets and has rivals Camaro ZL1 and Challenger Hellcat in its sights. 😉

We’ll have to wait to find out if the vehicle in this video represents an early look at a 2018 Shelby GT500 mule or our first look at a 2018 Shelby GT350 Mustang prototype with a refreshed exterior and upgraded Voodoo engine which we know is planned at the Romeo Engine Plant based on UAW documents we reported earlier this year.