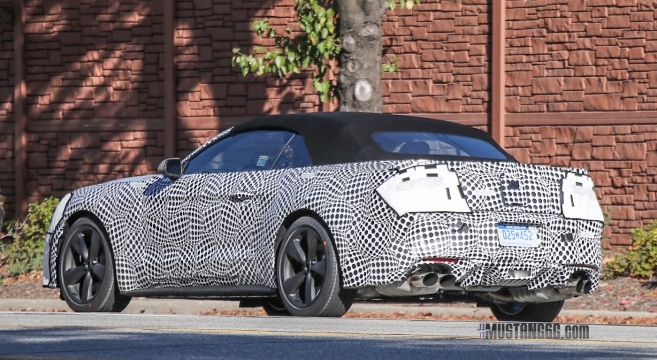 The 2018 Mustang has been out testing in full force and we just caught our clearest glimpse yet of a prototype sporting a quad exhaust system — something we’ve seen before on mules and prototypes but never with this level of detail.

This convertible S550 prototype bears the visible signs of an optional active, quad-tip exhaust system which we expect to see in the refreshed 2018 Mustang, as the standard lineup will receive additional features and aesthetic changes that benefit from the trickle-down from the Shelby GT350.

Similarly, a closer to production-spec rear valence is seen on the prototype which also takes influences from its big brother Shelby.

We expect the mid-cycle refresh to introduce a revised port fuel injection and direct injection Coyote engine with a modest power increase, new 10R80 ten-speed automatic transmission and the optional quad-tip active exhaust system worn by this prototype, which clearly shows a different muffler design than the 2015-17 Mustangs.

See the full 2018 Mustang prototype with active quad exhaust in the forums.