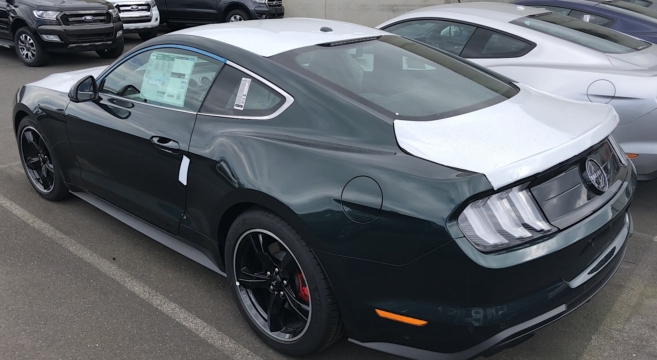 RHD Bullitt Mustang Arrives Down Under

It’s no surprise that the 2019 Mustang Bullitt has been a big hit stateside but it may surprise you how many fans of the late Steve McQueen tribute car live outside the U.S.

Ford, recognizing this, wisely decided to sell it overseas, and we’re now seeing the first examples of the right-hand drive (RHD) 2019 Bullitt arrive at dealerships — and this one from Australia was just spotted by Mustang6G ember Michael (mookstube).

There are some minor differences between the RHD and LHD versions that can be seen, namely the clear tail lights on the exported version, and the lack of strut tower brace or center gauges. The export Bullitt also seems to get the 3.55 (instead of 3.73) ratio limited slip axle.

Check out the photos of this production RHD 2019 Mustang Bullitt in Australia.