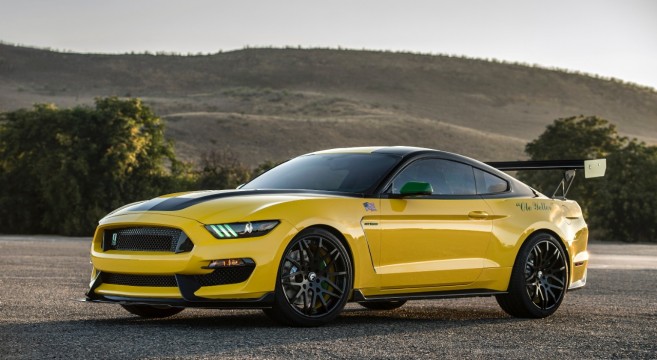 For the ninth straight year, Ford Motor Company has donated a special vehicle for the Experimental Aircraft Association’s youth education program to be sold via auction at the Gathering of Eagles charity event.

The one-of-a-kind GT350 Mustang is a nod to the famous North American P-51D Mustang aircraft which served as the official pace and safety plane at the Reno National Championship Air Races.

Ford’s homage to the P-51D in GT350 guise features a custom yellow exterior finish with Ole Yeller accents and badging, unique carbon fiber components. The pony puddle lights have been changed to project images of the aircraft.

“This year’s one-of-a-kind Ford Mustang honors two aviation greats, the iconic and historic P-51D Mustang fighter plane, and highly decorated fighter pilot, test pilot, and air show performer, Bob Hoover, who is referred to by many as one of the greatest pilots ever to have lived,” said Edsel B. Ford II, a member of the Ford board of directors.

“The Shelby GT350 Mustang, with its nimbleness, speed and aerodynamics, provided us with the perfect platform to create this tribute to the P-51D aircraft.”

See the “Ole Yeller” GT350 Mustang photos and details in the forum.