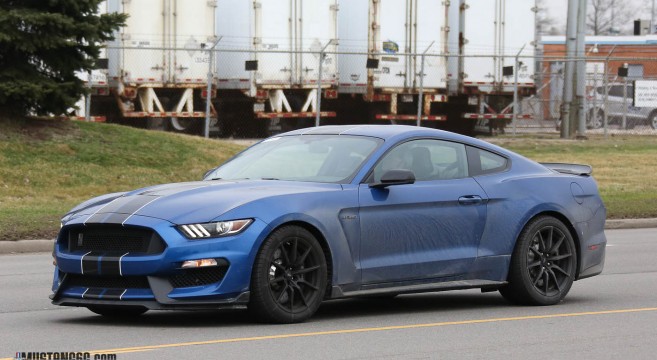 Hot on the heels of a 2017 Mustang spotting in Grabber Blue, we decided to see if we could track down the new S550 Lightning Blue color which Mustang6G forum members have been clamoring for ever since the 2017 Mustang color guide was leaked on the forums.

What we were able to capture were prototypes of both the 2017 Mustang GT and 2017 Shelby GT350 in Lightning Blue, the latter which donned black over-the-top stripes with white accents.

If you’ve been following the 2015 GT350 since its inception, the vehicle may remind you of the Shelby GT350R (and other Ford Performance vehicles), which also had black stripes, that Ford showed at the 2015 North American International Auto Show in the now-famous show color “Liquid Blue.”

Since then, there has been no shortage of public exhortation from Mustang fans for Ford to offer Liquid Blue in a production vehicle.

Well, it seems Ford did the next best thing by making available a similar color not only for the 2017 Shelby GT350 but for all S550 Mustangs starting with the 2017 model year.