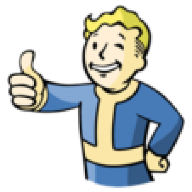 I want to get your thoughts about whether or not the performance pack is a good buy for the Ecoboost model. Let me elaborate.

) approaches, I have been debating back and forth about what model and options I would like to get. I am pretty set on getting the Ecoboost engine, and I will leave it at that because engine choice isn't what I want to talk about here. What I am really stuck on at the moment is the optioning, specifically the performance pack.

If/when I get a 2015 Mustang, I plan to use it as my daily driver. That said, I still want it to be fun to drive (obviously). For me a big part of that is how it will handle in the turns. I'm not looking for Miata type handling, but in my opinion the 2011 GT I drove just felt awful in the turns (insert boat comparison). My hope is that even the base level car will have a better feel in the turns.

I like the idea of having the performance pack because it seems to have good value (as discussed in other threads), but there are a few concerns for me. I am not so crazy about the wheels that come with the performance pack. Secondly, I do not really want to have to change out the tires/wheels seasonally. With the summer only tires that is sort of a pain and an added expense.

So the real question is will the performance pack add a lot to the driving dynamics of the car. Clearly no one can know this without a test drive, and I plan to test drive it with and without. However, based on what we know now do you guys think the performance pack is worth while for a daily driver? I don't really want to have to pay more for tires if I don't need to, but a lot of the other goodies that come in the performance pack seem pretty nice (bigger brakes, better suspension, etc.). Will they make a noticeable difference on the road though? I don't plan on tracking it.

Give me your thoughts about it. I'm sure there are things I have not considered.

PS I know there was a very similar thread, but most of the discussion was focused on the GT. So this is specifically meant to address the Ecoboost. 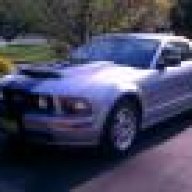 I would think that the Ecoboost will be the best handling model due to its lighter weight and better weight distribution. So adding a performance pack with its upgrades should make a good handling model even better. I personally think it's a great value on the Ecoboost for what you get (plus you can pair it with an auto trans for a daily driver, unlike the GT).

To get all that stuff separately later would cost a lot more. I think it makes a ton of sense, even for a daily driver, since you can get it with auto, which is what I would do.

I do agree on the black wheels though. But I could probably live with it on a darker colored car.
OP
OP

Well that is another thing I forgot to mention. I really like Ruby Red, but the black wheels on Ruby Red don't look great to me. I mean I can obviously just buy different wheels, but I hate to spend the extra cash when I already like several of the other wheel options out there. I guess I could trade with someone who didn't like their's. 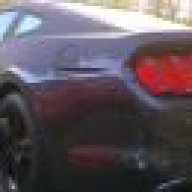 For me PP was a must have. Not crazy about black wheels, but can be remedied easily and cheaply. Will be a daily driver and gonna drive those summer tires right into February. Ruby red and the black wheels not bad IMO. Get the PP!
2015 Turbo Mustang Performance Package Manual Guard/Ceramic
OP
OP

doulos4jc said:
For me PP was a must have. Not crazy about black wheels, but can be remedied easily and cheaply. Will be a daily driver and gonna drive those summer tires right into February. Ruby red and the black wheels not bad IMO. Get the PP!
Click to expand...

If you don't mind could you elaborate a bit more? What makes it a "must have?" Are there specific parts that are must-haves or is it the sum of the parts?

Based on my experience with the current Mustang, if you're interested in handling feel and response get the PP. It's a no-brainer. It will ride a little harder (stiffer shocks), but it will respond more like what you are looking for.

FWIW, the Mustang (V6, EB or GT) is not an STi, GTI, Evo, 3XXZ, etc... It's a Mustang, and it has its own mystique, its own vibe. If you're buying one thinking it's something it isn't you're likely to be disappointed. I can tell you that as big and heavy as my car is, as antiquated as its SRA is, it doesn't feel like a boat. It is nimble and fleet of foot, and is a joy to drive on a twisty road. Just sayin'.

As for the wheels, you can always have them painted whatever color you like at a local body shop. You might want to leave them dark colored though, as you're going to be appalled at the amount of brake dust Ford performance brake pads produce.

Allerick said:
If you don't mind could you elaborate a bit more? What makes it a "must have?" Are there specific parts that are must-haves or is it the sum of the parts?
Click to expand...

With the EcoBoost Performance Pack, you will be getting the same brakes as the base GT. Although the base EcoBoost brakes are great, the Performance Pack brakes are much more responsive, and more confidence-inspiring. The sizing of these 2015 base GT brakes is the same as that of the outgoing 2014 Brembo brake package, just without the Brembo calipers (still awesome brakes, though!) Front/rear roll bars are upsized, with "grippy" type bushings to further fight body roll. Also, knuckles have cross-axis ball joints instead of rubber bushings (further helps handling).

Then comes the wheels/tires. They are 19" diameter by 9" wide. You may not go crazy over how the black wheels look, but they are wider and stiffer than any other base wheel, and come with excellent summer tires. Granted, summer tires aren't the best for wear but this tire is an aggressive compound, about 7/8ths of what the '12-13 Boss 302 (non-Laguna) tire was.

Personal preference I suppose. Wanna be set apart a bit from the rental car(V6) version and wanna get every bit of oem performance Ford is gonna offer. Rear end 3.55, should make it a tad quicker too. And my informal poll of about 30 people prolly 95% like the black wheels, me not so much, but again it will set me apart from the lemmings.
2015 Turbo Mustang Performance Package Manual Guard/Ceramic

Allerick PM me, I'll hook you up with my dealer. Got mine for 3.25% under invoice.
2015 Turbo Mustang Performance Package Manual Guard/Ceramic 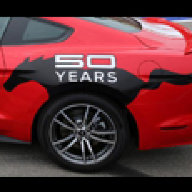 I was debating on same thing few weeks back but decided to go with PP. Reasons:
- I prefer stiffer rides. Suspension updates with PP will give me that.
- Cornering. PP updates will improve the cornering.
- Bigger brakes.
- I dont like the wheel in black but I still like the design on EB PP wheels and I want them.
- Gauges, they are not priority/requirement but I like them.

I figured suspension changes itself will cost me $2K or more if I do it after market. So I decided to go PP route.

My only bummer about the PP for eco is that I can't get the 50th anniv. wheels when packaged together AND I cant order a spare.

ShoNuff said:
No idea why i cant order a spare since the wheel sizes aren't staggered like they are on the GT PP.
Click to expand... 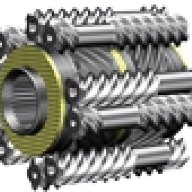 It could be for the reason that the slight increase in rolling radius on the 20" tires is just enough to put the differential rate that the minispare would create above a design threshold for the Traction-Lok. I'm just spit-balling here, but it's all I can think of.
Rick
[sigpic]8992[/sigpic]
'99 SVT Cobra Convertible

For me, I cant leave well enough alone when it comes to modding so the PP was an easy choice for me. Granted i still want to drive an EB with and without before i make my purchse but, i like the idea of factory performance parts (fit and finish) and the value of it makes a whole lotta sense. The upgraded brakes and the 19" wheels are what sold me on it. So much value there
You must log in or register to reply here.
Share:
Facebook Twitter Reddit WhatsApp Email Link