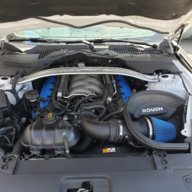 Hey guys so I have a 2017 mustang gt 31k M6 about 2 weeks ago it started to make this noise. It comes and goes some time it just shows up at idle some times all the time but the noise doesn't get louder with engine rpm. Things I've check for are vaccum leaks non, unplugged the fans no noise, press in clutch noise is still present. Only thing car has roush intake and PBD tune. Any ideas? Only thing i see is my alternator pulley makes a bit of noise when spinned. Only makes sound on a warmed engine

Second video giving it a bit of gas

And here's how it sounds when shutting down

Still on warranty? Take that to the dealer ASAP!

bigyzf said:
Still on warranty? Take that to the dealer ASAP!
Click to expand...

Highly doubt they'll cover it since its tuned I broke my stock air intake on accident so cant put it back to stock. Been trying to find a lid/cover car drives fine no issues.

jpadilla05.0 said:
Highly doubt they'll cover it since its tuned I broke my stock air intake on accident so cant put it back to stock. Been trying to find a lid/cover car drives fine no issues.
Click to expand...

Is the radiator fan spinning when it's making the noise?

usgiorgi said:
Is the radiator fan spinning when it's making the noise?
Click to expand...

It's not the fans as I disconnected them and the noise is still present. One of my friends I said it could be a pulley, my alternator pulley is making a noise while I spin it by hand I'll try and load a vidoe

No one else ever had this noise?

I listened to the vids posted. It’s hard to say EXACTLY what it could be from a viewer standpoint, but here’s a few things to check:

1) Water pump - if not leaking, pull belt off and spin the pump pulley by itself. Check for looseness or if it wobbles. If either exists replace water pump.

2) Belt tensioner pulley - again with belt removed manually turn the pulley. This type of pulley and others that are similar have a bearing and it’s possible the bearing is failing.

3) A/C clutch - with belt removed you could check this too by manually turning. If the clutch is making the noise ONLY when the A/C is on, it’s nearly impossible to test manually by spinning because when A/C is on the clutch engages. With car off, there is no engagement.

5) Serpentine belts can squeak or squeal at idle or under load).Here’s a simple way of telling if it’s a belt issue:

Make sure vehicle is safely parked. Start car, pop hood and have a Windex, Simple Green or similar “spray” handy. While the engine is idling, spray the front of the drive belts. If the squeal stops, that usually indicates it’s a belt issue. (Windex or Simple Green won’t harm anything at all for this type of belt diagnosis.)

——
This below SSM was released for the 2018-19’s and doesn’t apply to earlier models as far as warranty work. However it’s possible that an earlier model could have a similar issue (only reason I’m posting the SSM).