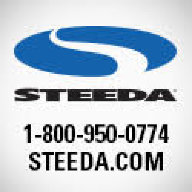 In the early ‘80s, State Troopers were looking to get away from their heavy and underperforming patrol cars. The sports cars of the era were making easy work out of getting away, as they were nimbler and had adequate horsepower to back it up. After dedicating time and resources to finding a car that could outperform these sports cars, the Ford Mustang was adopted as the clear winner in 1982.

Steeda: More Wins. More Records. More Championships... than all the competitors combined. Performance proudly Made in the USA.
Ask about our forum, military discounts & first responder discounts.
Need advice on your upgrades? Connect with a Performance Expert for product knowledge, advice and special pricing: 1-800-950-0774 or [email protected]