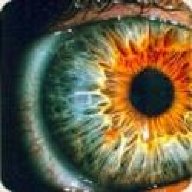 I frequently do ~700mi round trips.

Of course it makes the drive way more fun than in a normal car. My car has a ton of miles on it already just because I love driving it long distance.

Cons are gas mileage/expense, and if you have a loud exhaust your ears may be ringing by the end lol.

Drove 16 hours from Cleveland to Selina, KS two years ago. I didn't want to drive that far or that long, but it was the weekend after Labor Day and I assumed with all the kids back in school and vacations done for the year I'd be fine and didn't make reservations anywhere - boy was I dead wrong - every hotel was booked up. To top it off it was pouring rain from Columbus to KC so sometimes I averaged 70mph, other times it was down to 40mph. Absolutely grueling drive, but I think back on it fondly. I'll tell you this, only my bottom end hurt after that trip and I was astounded. Every vehicle I've ever road tripped, at right around 8 hours I get back and neck pain. Not the Mustang! A MUSTANG?! I couldn't believe it. Since then every year I single-tank it to SD from my hometown in CO without stopping, it just eats the miles!
The cons are, for me:
Nobody calls in a Honda Accord doing 120mph, but seems like every vigilante on the road can't wait to call in a Mustang doing 85mph - personal experience.
Worry - it's a lot easier to road trip a beater through places like Baltimore, Cleveland, etc, than your baby. They have potholes that will break a wheel, and the strut... and the tie-rod end.. easy, for example - plus other road rash things, etc. Also leaving it unattended overnight at a hotel is a bit worrisome.
Everyone in anything remotely sporty messes with you. The first Honda Civic is like, ah whatever maybe I'll run 'em. After the 40th Honda/Subaru/Challenger/Camaro it gets really old.
Just my two cents. 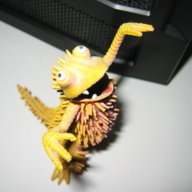 Did a 3500 trip from AZ to MT and back. Went through 5 national parks and practically had a smile on my face the whole way driving a 5.0. Watch your speed as it tends to creep up unknowingly easy and then you have lights flashing behind you (got a ticket in Browning MT because of this). Take a quart of whatever oil you use to top off, in case. Check all fluids and tires before the trip. Have fun!
2018 GT Premium, Ingot Silver, A10, PP1, Recaros
2007 4Runner Limited, V8, Titanium Metallic 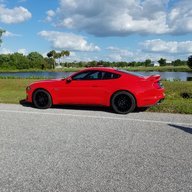 I don't have any long trips logged on my '19, but I did do L.A. to Western PA. back in 1990 in my '89 GT, with my wife and 3 kids (all teen angers). They loved it, car was a pleasure to drive 600+ miles a day.
Not sure where your stopping on your way, but once there, I would suggest a cruise up PCH (Pacific Coast Highway) up to Monterey Bay, or if focusing on SoCal, Angeles Crest Highway or also Mulholland Drive. Also LOTS of canyon routes in and around L.A., take your pick. I'd stay away from the usual tourist traps and see the true beauty of California, the rural areas. Anyhow have fun, and post pics of the journey once you get back 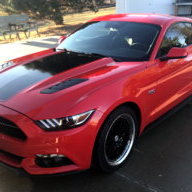 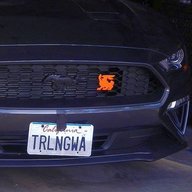 I did a few longish trips in 2008, 2009, 2013 Mustangs. Round trips of about 3000 miles each. Cars were comfortable and confidence-inspiring on the road. We managed to pack enough necessities in the available spaces without creating any claustrophobic feelings. Our practice was to stop for at least five minutes every hour, to stretch and re-establish normal circulation and perspective. Important to get out of the cocoon and in touch with natural environments..

I learned that on the Interstates 18-wheelers really do need to pay more: many places the right-hand lane is beat up to the point of discomfort at any speed. I'm usually a "Left Lane Is For Passing" evangelist, but you reach a limit.

Before the "ceramic" revolution, I waxed the 2009 car and left it without wiping down. Makes the end-of-trip cleanup a little easier. I have no experience with long trips in the modern super-slick surfaces era. The photo is of the 2009 after a ten-days' jaunt across the Southwest. Mostly Texas bugs. I Spray 'n' Washed them and let them sit over night and they rinsed off with plain water. The condenser was another matter. The GPS is Anonymous, or it might be from a 2008 convertible. 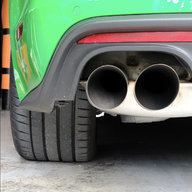 The best thing about road trips is the ability to drop it in 4th when some prick matches your cruise control speed and you get really tired of it! 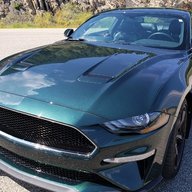 Last week took the Bullitt out for a spin (11 hours), Edmonton to Calgary,Highway 2 at 130 kmph trying to avoid lifted trucks flinging rocks, if you've driven the road you'll know what I mean. At any cruising speed 6th gear in gear acceleration was plenty enough to keep up with the whiplash effect of heavy traffic slowing down and speeding up. Even the tuned diesel trucks that sport some serious toque numbers around here weren't causing any issues.

Once off Calgary and heading into the mountains to Banff speed limits were the only reason to brake. Cruising along the ice-field highway from Banff to Jasper even at 6500 feet never felt under powered even when pulling out of viewing bays in a spirited fashion
Averaged 7.8l/100km (29mpg) and that included Edmonton to Calgary and cruising back from Jasper at 130kmph. Granted the park speed limits are all 90 kmph and to be honest didn't want to collect a moose or bear as a replacement for the pony badge

Car was very comfortable, far better than I expected to be honest, a couple over safe overtakes showed just how fast a 5.0 gets into triple digits and on many occasions I dropped to 4th accelerate and short shifted to 5th and never even let the engine open up and was getting some pointed comments from the co-pilot about unnecessary speed/acceleration. Dropping to 2nd for max delta V is serious stuff.

Actually what I had to watch was overtaking 3 cars where the car in front of me would assume they could go as well once they saw me indicating, not realizing I had already closed the gap, was in the other lane and was about to pass them at 30-50 faster than their speed. Brakes work good, horn is lousy.)

I had my doubts about its grand tourer credentials, now I'd be happy to road trip to San Fran and back.

The fuel tank could be bigger, but at highway cruising speed at those mpgs, not an issue for me, my expedition averages 11-12 l / 100km (19mpg) and even with a bigger tank still needs filling nearly as often.
2019 Bullitt Highland Green daily driver

I will echo most posts. Took a 3 day ~1600 mi trip in spring of 2019 (to see alpine blue bonnets in BB) with my son from Austin area to Big Bend and onto El Paso, White Sands, Carlsbad NM & home. Comfortable with excellent OA gas mileage of 27 mpg cruising at 85 mph or so avg speed. Pretty amazing to me, given a 460hp engine (PP2 tune). Old enough to remember the 60's muscle cars (and most everything else with a V8) getting sub 10mpg. Bigger gas tank would help.

Given a properly paved road surface the cabin noise is reasonable. Here in TX (and most elsewhere I think) all of the resurfacing efforts for some time have been limited to spraying tar and rolling rock into it. On these roads the noise at speed is deafening. And this describes much of the off highway road surfaces we encountered. My wife's 2011 E350 is a whole lot better sound insulated. Not apples for apples comparison, but something to consider. 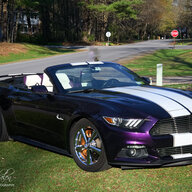 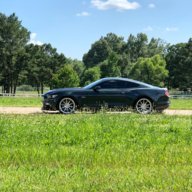 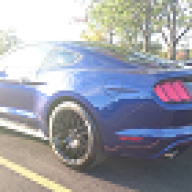 The longest I've driven in one day is 9 hours/630 mi. Filled up on the way out of town, and then only had to fill up once, about 30 miles into the return trip. Averaged over 25 mpg for the trip with 3.73 gears. A few cons I've noticed during that and other trips: the Recaro seats have no lumbar adjustment and get a bit uncomfortable after a while. Compared to my previous car, a 2001 Taurus, there's a little more wind noise. Neither are terrible and are easily made up for with a twisty road.
FRPP Power Pack 2 | FRPP by Borla Sport Catback

oldboy said:
Here in TX (and most elsewhere I think) all of the resurfacing efforts for some time have been limited to spraying tar and rolling rock into it. On these roads the noise at speed is deafening.
Click to expand...

Indeed. I live in El Paso, and visit my daughter in Austin often. And road noise is my #1 complaint in almost any car. But the worst was my favorite car: 2016 Cayman GTS fully loaded, which was so bad I had to use for the first time ever freaking ear plugs when going to BB. And my wife found objectionable not being able to recline her seat. Had to sell it at a huge loss ($40K+ of options), since I didn't have any use for it without traveling on it. No UHPA/S tires available for that car. The Mustang shouldn't be that bad, but probably close. The good news is I'll fit it with UHPA/S tires when the current P4Ss crap out, or probably before. That should help with the noise quite a bit, since summer tires are a lot noisier by design.
2019 Bullitt DHG K7979, MagneRide, Electronics pac, cover. MODS: Blendmount/Mirrortap V1 mount, 61148BCX black Gorilla lug nuts, Steeda jacking rails, OEM rubber floor/trunk mats (5), OEM dual horns, DD reflectors/LEDs, GT350 gauge pod, 35/20% tint. Radiator screen, 'de-studded' engine.

Elp_jc said:
Indeed. I live in El Paso, and visit my daughter in Austin often. And road noise is my #1 complaint in almost any car. But the worst was my favorite car: 2016 Cayman GTS fully loaded, which was so bad I had to use for the first time ever freaking ear plugs when going to BB. And my wife found objectionable not being able to recline her seat. Had to sell it at a huge loss ($40K+ of options), since I didn't have any use for it without traveling on it. No UHPA/S tires available for that car. The Mustang shouldn't be that bad, but probably close. The good news is I'll fit it with UHPA/S tires when the current P4Ss crap out, or probably before. That should help with the noise quite a bit, since summer tires are a lot noisier by design.
Click to expand...

I should have noted that my 2015 GT has 20" OEM wheels with 275x35 Michelin Pilot Sport A/S 3 tires (stock exhaust). This no doubt exacerbates the noise issue as compared to the 18" or 19" wheels/tires although the track options might be as bad. I do still prefer the look however. Love Far West/Trans Pecos/Big Bend area of TX. One of the few places left where you can travel 20-30 minutes on secondary roads without seeing anybody else going in either direction.

Sorry to hear about the Cayman. Nice car.

Hard to imagine that I drove round trip from NJ to Denver in 1970 in a TR4 (non-stop. Ah, youth) to see a college buddy and had close to that experience (save some trucks) on I70 in KS late at night:-).

My car has 255/275, and with summer PS4S tires, so no way my car is going to be quieter than yours with basically the same size A/S tires. Damn. Better take earplugs again when I make it there. Was looking for availability at the Chisos Mountains Lodge, but absolutely zero; not even for 1 night. I like staying there. And never miss the road to the Santa Elena Canyon; it's incredible.