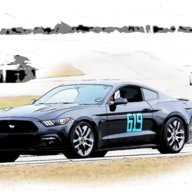 Back in June, a little accident in my garage led to a small dent in the driver's side front fender. Because weve been in the process of moving into a new house, I didn't get around to addressing it until this week. I called a PDR company located in Conroe, TX (just north of Houston) and he came out to my house. He started working the metal and an hour later, it's hard to tell anything had even happened (if you know exactly where to look you still see a slight imperfection). He said the aluminum was hard to deal with but it didn't like it to me watching him work. Best of all, it only cost a $100. I'm more than pleased with the outcome. If you ever have a dent, find a good paintless dent repair company. You won't be sorry!
Advertisement
You must log in or register to reply here.
Share:
Facebook Twitter Reddit WhatsApp Email Link