Mach1 owners/future owners - Can you share your thoughts why you bought it?

So when i made my mind to get Mustang month ago Mach1 was not an option. Thanks to a lot of people here i decided to wait few months and get MY22 GT.

Waiting time is not a game changer here as i might wait for MY22 even with Mach1, but i just started to think about getting Mach1 instead of GT. I dont want to get it at the end of the year and i dont want to rush this decision so with both it will be the order in about sept/october to get it early in 2022.

I read topics all the posts in bargain and rip off topics. Also i am talking about European version and the only thing i can add is different wheels(which i 100% will) I believe its maxed out. Also European one is cheated a little bit, same as bullitt did as it has 460hp comparing to 450 in gt.

I wont use it on track so not sure if some of those special addings will benefit me at all a on daily basis. From what i definately like is -> Tremec transmission, which i read is great (getting manual for sure). I have to admit that i love that rear diffuser and mach1 exhaust which looks way better for me, but that could be added for GT probably as well? I also feel like it would be nice to have something different that will always be a little bit more special but when it comes to power its only 10hp. Difference should be about 8000 eur which is about 9.5-10k usd for Mach1 over GT.

When it comes to better value in future over GT i am not convinced as well. It could as there wont be many, but there will be new line in 2023, maybe more special versions and that 15% difference here over GT could affect it as well.

Anyway, as things stand i am currenyly more likely going with Mach1

Can people who made/ will make orders for Mach1 share thoughts why are you going for this one instead of GT?

I'm not sure I would get a Mach 1 if I was you. You said you are not planning to track at all, so I think a GT would suit you just fine, save the Euros!

From an American market perspective, I'm interested in Mach 1 precisely because I will be tracking it a few times a year. I don't care if the parts came out of the bin, the point is you are getting a track ready car out of the box. You are getting all the cooling you need, which I can't emphasize enough is critical. You are also getting the Tremec, which should both feel better and be more reliable than the GT Transmission. The reason I have held off from upgrading my 2014 Mustang GT Brembo pkg car, is that the S550 were not track capable out of the box, even the "performance Package" cars. It was a joke, no serious emphasis was placed on to cooling and that is a problem. Magazine tests and in the real world guys were overheating rear differentials, and on longer high reving tracks engine oils temps were high. My S197 would overheat the engine oil, so I put a BOSS 302 oil cooler (which is a fairly weak cooler) and solved the problem. I also did some differential cooling and a differential oil catch can. I don't particularly like the MT82 transmission, in my first GT (bought new) it was great, no problems and smooth. My Second GT (bought used low miles) its more clunky and doesn't like the cold at times. It's not broken it just doesn't feel as good. In the S550 cars they gave them longer gear ratios which took some fun feeling away from the car in my opinion, another downer.

If you are not tracking, I really don't see the price justification to buy a Mach 1 new, heck people have pointed out its possible with less money to add a lot of the Mach 1 cooling parts to a GT.

For daily use the GT will be just fine, and you will save a ton of money. Really think about the percentage of time you actually spend driving fast on public roads, the truth is it probably doesn't even justify costs for a GT, but I know what it is like to be infected with the V8 bug!

For the record I have track experience in several different sports cars, and encountered slight problems with each from cooking brakes to hot engines. If you aren't tracking you have a hell of a lot less to worry about, spec out your GT maybe add magneride and save the money, good luck and happy driving!

I tracked my Mini JCW, I will track my Mach 1 too, and great handling and cornering is important to me. Also buying EU version. Difference to GT is 10 k€ so it's not that big for a car I want for 20 years or so. Wanted to wait for S650 first but who knows how long will V8 stay in Europe and this edition just checks all the boxes for me - great look of S550, handling improvements, great exteriour design in the front and rear, great engine and exhaust sound, nicest wheels ever (optional ones). I consider it a lifetime opportunity and there's no reason to wait for me.
Last edited: Mar 15, 2021 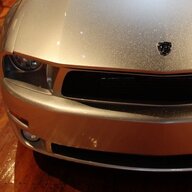 SEAR12 - I Would not bother with the GT as the Mach 1 is a better car overall with much nicer manual gear box. The TREMEC 6 speed is the way to go! The other option you have is to wait and see what ford has coming up for 2022 on the rumored S650/CD6 platform. I started shopping for Mach 1 early this year, but I could not get it in the color I wanted as ford is not offering the same color choices as they had on the Shelby GT350. So for me it is no go and wait. BTW- When you are willing to pay over 60k for a car you should not settle on second choice for exterior color. I noticed that the Ford Mach 1 brochure for Australia has just five color choices. CRAZY!