lookin at an eco-boost.

hey guys here from the fiesta st forums lookin for something different. ive driven the auto eco boost and the whole time i had it i thought if only it had a stick. from what i can muster people on the internet seem to make this car out to be no good but i liked the auto well enough and on paper it seems on par with many bmws' in base 4 series trim which i don't see people complaining that that car is slow or heavy. i feel like if ford made a rear drive only comfortable focus rs with a little less power and more weight for waaaay cheaper people would go crazy for it which is what the ecoboost, is on paper any way. the fiesta is rough and it frankly handles excessively well for my purposes and isn't worth the ride. it also has a smaller trunk than the mustang with the seats up and i think i could get away with a coupe as an only car. and finally it seems like i can get one for just a few thousand more than my fiesta with similar miles (55k).

so how reliable are these things in the upper miles
i might be moving to north Carolina so how are these in snow? i assume their not bad at all and NC isn't either as far as snow goes.
and how do you like them? 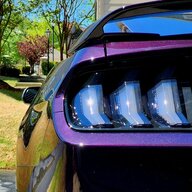 I've got a 15 Ecoboost PP that I've had for 4 years. I've got 59k miles on it and the only "issue" I've ever had was simply a misfire that was corrected with a software update from a TSB. Of course, I can't speak to the higher mileage reliability just yet, but all signs have been good so far. Full disclosure, my passenger window is acting up at this point, so I'm certain the motor will be failing soon, but that's more of a maintenance thing in my eyes. I live in Indianapolis, and in most cases, I've been alright in the snow when I've had to drive in it. Only one storm forced me to turn around and come home in the time I've had it, and that one was pretty bad a few years ago. I'm actually moving to NC next month and have been looking forward to not having to worry at all about the snow down there. My understanding is there was about an inch in the RDU a few years ago that shut everything down (I only know about this because my cousin lived there at the time, so my details may not be perfect). With that being the case, I'm pretty sure you've got nothing to worry about with the snow and a Mustang in NC.

I love my Ecoboost. I'll admit I've been tempted to trade it a few times, but those were for an HPP, a Mach 1, and an SS 1LE. Each time, I ultimately decided I didn't want to give up my Ecoboost for them (I'd rather keep the Ecoboost and add one of the others

). I considered things like the Fiesta ST, and even had a Focus ST briefly before getting the Ecoboost. After having the Ecoboost, I drove a Focus RS a couple years ago and I was no longer as enamored with it as I was pre-Ecoboost. I really enjoy the Mustang a lot more than how the Focus feels (that's just me of course). Sorry, this became a little lengthier than I intended, but hope you find it helpful!
OP
OP

no that was great not to lengthy at all. how does it feel compared to the focus in terms of power and comfort.

test drive both the ecoboost and the GT. you might like the GT more. Insurance and cost wise, I think both of them will not be that far apart. For me, I would go for a gt with digital gauge and auto. I will cost more later if you go with the ecoboost now and later go for the gt just like you are doing now moving from fiesta to ecoboost.

tyler jhon said:
no that was great not to lengthy at all. how does it feel compared to the focus in terms of power and comfort.
Click to expand...

I think the power is comparable. At least the "feel" of it anyway, which they should, their motors are very similar and they weigh within a couple hundred pounds of each other (EB and RS that is). Regarding comfort, I think the Mustang is more comfortable in several ways. The seating position I definitely prefer in the Mustang; no matter how I adjusted the Focus, something always felt off. The pedals are in a much better spot for heel-toe shifting in the Mustang. For longer drives, the Mustang is the first car I've ever owned/driven where I could be in it for an extended period and genuinely not get uncomfortable. I took a road trip from Indy to DC last year and literally only had to stop for food, gas, and restroom breaks, but I never got that cramped feeling that made me want to pull over just to stretch as can be common for road trips. The trunk space is really good for what it is, but the Focus wins that given that it's a hatchback. If you regularly have to haul bigger things, that's something to keep in mind. All in all, I love it, like I mentioned above. It's practical (I averaged like 33-34 mpgs on that DC road trip and I'm usually in the upper 20s to low 30s for regular driving), and it's still plenty of fun for the curvy roads. And being a Mustang, there's so much in terms of aftermarket parts you can do with it. A cat-back and tune are relatively cheap and easy boosts to the torque and power while remaining emissions compliant (if you're moving to NC, that will matter). And of course, there's plenty out there for you to go all out too if you're craving even more power. The only thing that ever bugs me is actually other people; when you drive a Mustang that's powered by anything other than a V8, there are a lot of people that will turn their noses up at you. I get it pre S197, but we're in better days now and people seem to ignore that. Nothing that necessarily has to influence your feelings/decision of it obviously, but it does get old, so just have to tune that out. 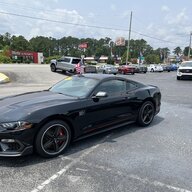 I had an eco boost auto convertible as a rental for about a week this past fall. My truck was in the shop and it’s before I had my GT. Car had good power, handled good for a convertible, and was comfortable. I went with a GT, because I like the sound so much better. The eco boost is a good fit for the car, and it has more power than the GT I wanted as a high schooler in 2000. I’m in eastern North Carolina, two hours south of Raleigh, we hardly ever get snow, if we do it is mostly just a light dusting, doesn’t stick very long. If you’re patient and can drive in snow, the mustang shouldn’t be a problem.
OABAAABA
2019 GT 400A, Oxford White, 10R80.
Current mods: SR Performance Shifter
Future mods: FP CAI,GT350 intake manifold, AWE touring exhaust, FP hood struts, strut tower brace, FP engine dress up kit, Bullit brake kit, PP2 front splitter 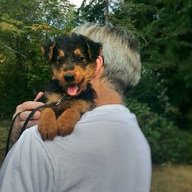 Back in 2015, my girlfriend was due for a new car. Her 1999 Cougar had a catastrophic failure and she was looking for an upgrade.

At the time, I was driving a 2013 FRS which happened to be the slowest car I've owned. I've had some pretty quick cars prior, but I wanted a change of pace.

Anyways, we test drove a ton of cars. Being a Ford guy, we went to the local Ford dealer and test drove an Ecoboost with a manual, and a Fiesta ST. We started with the Fiesta thinking that we should drive the lesser car first. We both loved it. We then got into the Ecoboost and were underwhelmed. It felt sluggish in both speed and handling.

She bought the ST and never regretted it once.

Fast forward to 2018. My FRS was about to hit 100k miles, and I was really just wanting a change of pace. I ended up spending hours doing research, and decided that if I was going to buy a Mustang, it would have to be a Performance Package car and a manual. I found one local and went to test drive it. The PP1 made the car feel like a very different vehicle. It was more responsive and handled far better than the Ecoboost I test drove a few years prior. I drove off of the lot in the 2018 Mustang GT PP1 that I currently own.

The Mustang tends to be the car we take on longer trips. I'm 6ft and 215lbs. I'm built with a slim frame, but about 40lbs over weight. The Fiesta is comfortable enough for me, but I can never get that perfect feel. My elbow is never happy on the door panel. Her car also has the Recaros, which I absolutely adore. Getting in the Mustang, it feels like a car designed for big people. I'm not a small guy, and it feels kinda like I'm a little kid playing dress up in my dads clothes.

As a plus side, you can fold the seats down in the Mustang, and fit 8ft boards. I recently bought a bunch of 8ft 1x4's and had them in the Mustang.

To the point, going from the ST to a base Ecoboost will be a bit disappointing in the handling department. If you do an Ecoboost, try to get a Performance Package, or Handling package depending on the year your looking it. It'll bridge the gap in handling a bit. 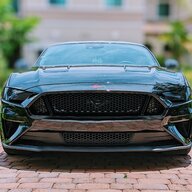 I’m thinking a base as the pp are a little out of budget I think (I’m both cheap and poor). The base can be had with (55k) for around ($20k). I think the pp gets more power? I’m thinking just a base and some sway bars sounds like the recipe for me.

I think the HPP trim is the only version with a little higher HP. I think you should stand firm on getting a stick for the fun factor and you just won't always be happy with the choices the automatic makes. I don't know what the wheels weigh on the base model, but the pp1 wheels are heavy so I swapped mine out and shaved 7 lbs. per wheel. That makes a difference in handling and road feel.
2020 GT PP1 Magneride Magnetic, 2019 Airedale Terrier Garage Dog Edition, 2021 Airedale Terrier Honey Badger Edition
You must log in or register to reply here.
Share:
Facebook Twitter Reddit WhatsApp Email Link