I am hoping to purchase my first Mustang in the next six months or so.
I have liked the 50 LE since introduction.
I have 35th Anniversary T Bird SC so it would pair up nicely.
I don't know if it affects value really and have never seen production numbers breaking down the two colors. Is one color generally considered more desirable or collectable?
I have very rarely seen the Kona blue and assume Wimbledon White made up majority of production.
Any advice or insight is appreciated.

Attached is the supposed breakout of the true 2015 50th Anniversary LE production of 1,964. 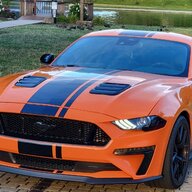 I know back when these came out, my dealer told me that 1 or 2 of them were damaged and never made it to market, I think both were Wimbledon Whites. It takes a very special owner to have a 50th...I am a 3rd generation Mustang owner, my grandfather worked for Ford from 48' to 82' and he had an early 65 (pre-July build), but I am not a collector...now had my grandfather kept that car, I may have become one, but it was sold in 1970, 2 years before I was born, and while the Mustang was popular, it wasn't as collectible as they are today with age; my mom owned a 72 and is the car I came home from the hospital in when I was born....but back to my point; the investment when new on the 50th was typically $10-$15K above MSRP, and a lot of the people who got them tucked them away to rarely see the road..to me, it wasn't a drivers car, and the dealer premium was just too much to overcome....what I have seen on the market lately for them are in the high 30's/lower 40's, just down a few thousand from original MSRP of $46...knowing that most people paid $50K+ it doesn't look like a good "investment car" in today's world, but it also depends on what you want it for--do you wanna tuck it away for another 10 years, or do you want to take it out and enjoy it...if its gonna be a driver I would say look at 18+ vs the 50th, the later S550s had a lot of upgrades and improvements...these are just my opinions, but the money is yours so spend it how you wish
Current: 2021 Twister Orange/black stripe, 401A, GT Performance Pack, 6 speed manual, Active Valve Exhaust, B&O Sound. Roush Phase 2, 644 hp/593 ft/lbs at the wheel . 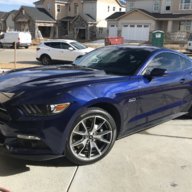 I love either color, I would get whatever you can find the best deal on. I wanted WW but found my KB local so that worked well for me.
2015 GT LE #1401 Kona Blue Auto 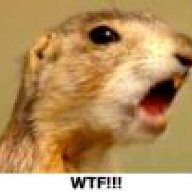 From time to time I'll see a 50th LE pop up for sale that was obviously bought to drive, having as much as 70K+ miles on it. Even with the use and mileage, the prices seem to still run $5k or more above other premium GTs. You have to really want/appreciate the uniqueness of the LE to pay the premium price people are asking. Low mile LE's are still commanding near MSRP prices, or even more if they've been mostly stored since new. I have to agree with a previous post, that unless you're looking for a LE for a specific reason, i.e. future collector/investment, or gotta have the unique combination of features not offered on other models, it's a high premium to pay for a driver.

Personally, I bought a 2009 new from the dealer, and really liked having the 45th anniversary badge on the fender. It was a nice distinction from the all of the '05-'08 I saw everywhere at the time, even though that badge was really the only difference in the car. When I bought it, I told myself I would own a 50th car, even though any news or reliable info about the model was still more than 5 years away at that point.

I've loved the 50th LE since they were revealed pre-production, but as much as I wanted one over the years, I need my Mustang for everyday driving, and the various uses I put it through would not do well to uphold the value of the LE, so I never felt it was a practical purchase for me. So I compromised and got an AP car. I searched over 6 months looking for the right deal and right options until I finally was able to make a deal on one at a dealer about a 2 hour drive away. It had everything I was looking for except the spare tire option, and the color was not my favorite, but after sitting on the dealer's lot for about 2 months without selling, they finally agreed to my price so I was able to buy it for less than the average price of a regular GT premium.

The point is, I wanted an anniversary car, but because of my circumstances I wasn't going to pay more for it than any other GT with similar equipment, which meant the Appearance package was my best choice. If you're looking for something to drive, you can get better value for your money with a different model. If you want something a little more unique than a regular GT, you could look at the Cal Special, which was available on newer model years so it comes with the enhancements those newer models have.
Last edited: Mar 9, 2022
You must log in or register to reply here.
Share:
Facebook Twitter Reddit WhatsApp Email Link