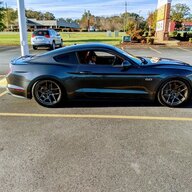 100mphclub said:
I tried hose pinching pliers without the best results. The fluid was seeping so I was trying to hurry. I found out my screws were metric thread and the tank was made with standard threads. It immediately ruined the top threads and I didn't have a tap to try to fix them. I found a bolt that was a tad too long, so I used a shim to make it all work. For now, I just raised it up a hole and skipped trying to flip the bracket without taking the bumper off. So far, it feels super steady with the two hoses attached. If that doesn't work, I'll build a new way to mount it after the track day. I'm hoping the burping funnel was able to get most of the air pockets out of it. Time to drive and put some miles on the car.

Yea, I apologize about that I had a welder do these I'm guessing tapping holes ain't what he's good at. once you get it in there and running you should be able to forget it.
You must log in or register to reply here.
Share:
Facebook Twitter Reddit WhatsApp Email Link