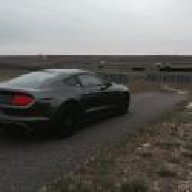 This is our Mustang named Karen (Ricky Bobby reference). She is a Base GT with the Performance Pack and serves as our development car here at Brey-Krause. The car is used as our track car for DE events. It also serves as a summer commuter. The main objective that we focus on with our project cars is finding the perfect balance between track and street driving.

Other than a Ford Performance by Borla sport exhaust and a 2.5lbs. fire extinguisher we did not do ANY changes to the car before our first track event. These cars are phenomenal right off the lot. One thing that we always do when we are building a new track car is learn what the car is telling us. All too often unnecessary modifications lead to an unbalanced car with one component over powering another leading to more wear on other parts. However you can't go through life with a stock exhaust on a Mustang.

Here is the comparison between the Stock vs. FP Sport Exhaust:


After our first track event we learn that the seating position was not optimal with the stock seats. While the stock base model seats worked surprisingly well. We found that the energy spent on holding ourselves into could be used more efficiently with some good aftermarket fixed back bucket seats, we chose Recaro Profi XL. Aftermarket seats are on the more expensive side. However they are worth every penny, especially if you are planning on doing more that a couple track events a year. There are so many benefits to having aftermarket seat. Most importantly being seating position. A proper seating position can improve handling though a lower center of gravity in the car. It can also improve driver reaction time which allows for faster shifts and quicker movement on the steering wheel. Last but not least its freaking comfy, you will be amazed at how much less strain you body takes in high G turns.

Also could not resist doing some ascetic touches

Just say NO to chrome!

Ahhh the things you can do with a water jet

Short Shifter:
Another product we purchased was a short shifter kit from Ford Performance. This also enhanced the seating position allowing the driver to comfortably and quickly shift through gears. We also made up a custom shifter extension to get the shifter closer to the steering wheel.

Even though this shifter does reduce the throw. They for some reason shortened the shifter height (probably to make it seem like it was doing more). This made shifting a little awkward and increase the distance from the steering wheel to the shifter (more time between shifts). So we made a long short throw shifter? yeah something like that. One of the benefits of having a manufacturing plant at your disposal is you get to make stuff like this in your spare time!

Tires:
Next thing that we decide to do was tires, don’t worry we gave the old tires a smoky burial. After a couple more events we found that the stock brakes were over powering the stock tires. The ABS was kicking on under heavy braking, and not once did the brake pedal go soft. Thus meaning time for some Toyo R888’s! These tires are phenomenal in the dry and great in the wet.

Camber Bolts:
One thing we quickly learned once we got the sticker tires on the car was we needed more camber in the front. For now we opted to go with the Ford Performance Camber bolt kit and not to go with camber plates. These gave us just enough camber to even out tire ware. Since installing camber plates requires more labor we decided to hold off on tearing the suspension apart until we have a plan for what we are going to do with suspension. I would also like to note that the only wear and tear we are seeing on the car is cracks in the rubber bushings in the rear sub-frame. These showed up around the 4 track event. There are a couple options we are looking at including replacing the rear sub frame with one that has solid bushings or a bushing brace kit.

Video showing movement in rear suspension:
This video is from the rear looking forward the bushing that have taken the most beating are the two centered about the sway bar. You can see how much movement there is under hard breaking and turning.

This video is in front of the left rear looking back

Harnesses:
The next big step was harnesses. Harness along with good seats might be the best modification you can do to your track car. After going to a stickier compound tire we found that our bucket seats needed a little help holding us in. When there are bruises on your knees from holding yourself in your seat, its time to upgrade to harnesses. We went with Schroth Profi II 6-point harnesses. When we installed the seats we used our R-9184 & R-9185 seat track adapters (with R-9186 Sub Strap mount) which not only mounts the aftermarket seats but provides provisions for the stock and aftermarket belts. So we already had places to mount our lap and sub belts. Then we used the R-1180 Harness Mount Bar to attach the shoulder harnesses.

Here she is as of now

We have new wheels on the way, but that where we are so far!
2016 Mustang GT named Karen. Ride with the fear.:cheers:
Our S550 Build

We were burning through tires on the stock Performance Pack wheels so we decided to up the width hoping that wider tires would last a little bit longer and save some $$$. The PP wheels would get about 3 track events (with stock Pirelli & Toyo R888's) before they would get dangerously low. Now with the wider tires (Toyo R888) we are at 2 track events and they hardly look used. These wheels also add roughly 10 horsepower due to how awesome they are!

And man do these cars stick with tires that big!
2016 Mustang GT named Karen. Ride with the fear.:cheers:
Our S550 Build

Now the fun part of the build begins! Now that we know how the car handles the track in the stock configuration, it is time for some improvements.

Some Chassis Bracing thanks to Steeda

Out with the old

In with the new Ford Preformance Track Suspension