Are you gonna trade your current mustang in when the s650 comes out? 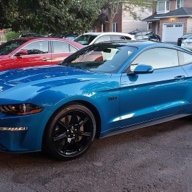 jpro said:
If the S650 doesn't have the same uneven body panel gaps as the S550, its a non-starter for me. I gotta look at my car and think "what the hell were they doing during assembly and where was the quality control?" LOL
Click to expand...

Yeah the 3 blind mice that assembled mine might be retired by then. I'll trade the '16 when it's worn out and too expensive to recondition. Kept the '03 Cobra for 12 years, and bought the S550 used. There isn't much they could put in a new car to get me to buy one. The first owner always gets hammered on depreciation.
2016 GT/CS convertible - VMP 2.3 charger.
03 Cobra convertible w 2 3 Whipple gone but not forgotten I like my car, so I have no plans on trading it in or selling it when the S650 comes out... With that said it might change when I see it.... It would have to be a dramatic improvement in design. And I personally still think they knocked it out of the park with the S550, and don't see how they could outdo it.

Besides, current plans have me leaning toward a '22 GT500, although recent thoughts of buying more property instead are swirling through the brain.... Just got my 19GT to hold me over, even when the new models come out I like to wait until the second revision for improvements to the platform. I think I've got the car I'll drive for the rest of my life. If I'm very lucky and can maintain both the car and myself I hope to be driving around in a nice twenty year-old Mustang convertible one day.

Yeah, newer cars are - generally - better cars. But you got to get off the hedonic treadmill somewhere. I rather build mine up when warranty is over.

Are you gonna trade your current mustang in when the s650 comes out?

No! Mine is paid for and runs great. Not going to put myself in a financial hole with a new car. If you look at Mustang pricing, including dollar inflation, Ford is out of their fucking minds with what they're charging for the car.

Ford is out of their damned minds with Mustang pricing. These prices are too damn high!!!
2019 GT, PP1, MT82, 301A, Magneride, Active Exhaust, Kona Blue If you look at Mustang pricing, including dollar inflation, Ford is out of their fucking minds with what they're charging for the car.

Ford is out of their damned minds with Mustang pricing. These prices are too damn high!!!
Click to expand...

Copperhead73 said:
but for the fact people are buying them at a fairly high rate
Click to expand...

No, they are FINANCING them at ridiculously low interest rates. That's the #1 cause of car inflation - they can because by far most people buy the payment, not the total price. If you had to put 20% down and pay 7% interest for a loan term of no more than 4 years the eligible buyers would take something like a 50-70% hit. With nobody able to afford the car at the asking, the MSRP would come plummeting down.

Also Hondas sell at MSRP or very close, while Mustangs routinely sell at 10-18% off. So the '$38,000' is really more like 32-35,000. You do have a point that Mustangs are priced about 20-25% more than what currency debasement alone would imply. A big chunk of that is the evermore onerous and preposterous production costs thanks to American labor unions. Domestic production Hondas are built in union-free, freedom of association States for a very good reason. Otherwise, yes, Honda quality would suck and be priced at the same market disadvantage as Ford cars.
Last edited: Aug 5, 2020 Bought my 2008 V6 convertible used, drove it for 10 years and loved it. Purchased my 2018 EcoBoost coupe used, love it, and will probably drive it for 10 years. With the power and mileage of my EcoBoost, I can't imagine that the s650 would be enough better for me to trade in my car. We will see....
Scott Holub
2018 EcoBoost Premium Plus in Lightning Blue

I might have my used '15 paid off by then so no I won't be trading in. I kept my dearly departed SN95 for 19 years before someone was kind enough to crash into it, causing me to buy the '15. I put some wrench time in both cars, so there's sweat equity and therefore sentimental value as well.
Advertisement
You must log in or register to reply here.
Share:
Facebook Twitter Reddit WhatsApp Email Link

Show me you and your Mustang out having fun in the winter snow!!
2

Are you guys able to turn your steering wheel when the car is off?

Can you turn off the greeting tone when you get in your car?