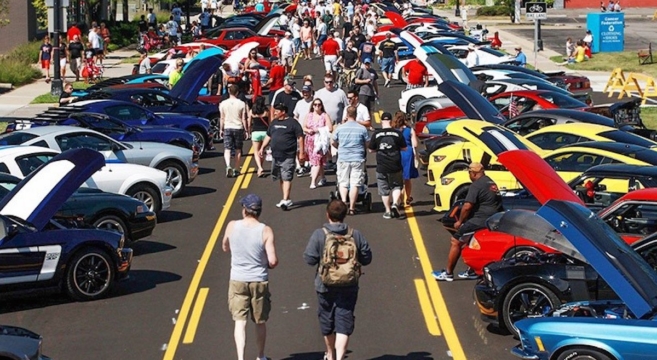 Ford is gearing up for the annual Woodward Dream Cruise and it has a series of Mustang-related events and vehicle debuts planned into the weekend.

To kick things off, Ford will be unveiling a new production vehicle on Thursday, August 16 (10am EDT) at the Ford Media Club House. Then the real fun begins.

Ford will be auctioning the Mustang “JDRF” Bullitt and begin raffle sales to win a one-off Kona Blue Mustang Bullitt to support juvenile diabetes research — the winner will be selected in November.

As this is the 20th anniversary of Mustang Alley, Ford expects as many as 1,000 Mustangs lined up for a nearly a mile this Saturday, August 18.  This coincides with a Bullitt parade in which the new 2019 Bullitt and historic Bullitt models will parade down Woodward Avenue starting at 7am EDT.  Later that day, the Eagle Squadron Mustang GT will be presented by Vaughn Gittin Jr, to the AirVenture auction winner.

Check out all of the Woodward Dream Cruise / Mustang Alley events that Ford has planned this week.