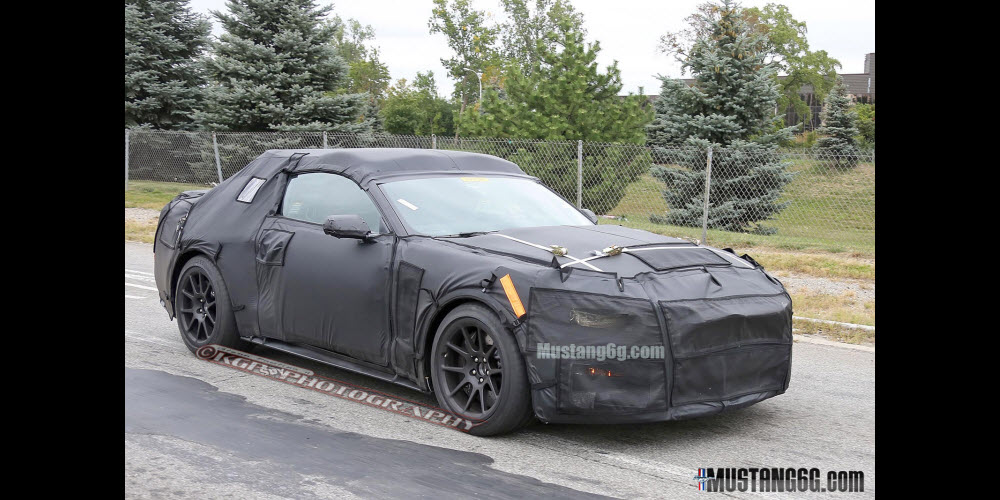 While all prior Mustang prototypes have been visiting several laboratories around Dearborn, this prototype sporting a quad-exhaust setup was entering the gates of the SVT workshops. There are some key differences visible on this prototype.

In addition to the quad-exhaust setup (which gave a fantastic rumble), this Mustang gets revised camouflage to accommodate new, functional air-scoops visible on the GT350 prototypes. A mesh panel has been added to the GT350’s hood, and we can see an air-duct tucked underneath the camouflage. Another vent can be seen behind the mesh camo just behind the front wheel. The fact that the usual Mustang camouflage has been altered in favor of new breathable mesh panels indicates the new ducts and scoops are fully-functional, performance-enhancing features–just what one would expect from a car designed to top the Mustang model range. The prototype also has a new set of meaty new wheels and tires, which cover upgraded brakes and cross-drilled rotors–another sign that this Mustang is ready for track duty.

We also have a close-up of the Mustang’s new steering wheel which sports a taped up pony emblem and comes with a range of buttons to operate the more advanced infotainment options that are expected to be a part of the new Mustangs. Two instrument clusters can also be seen behind the mesh.