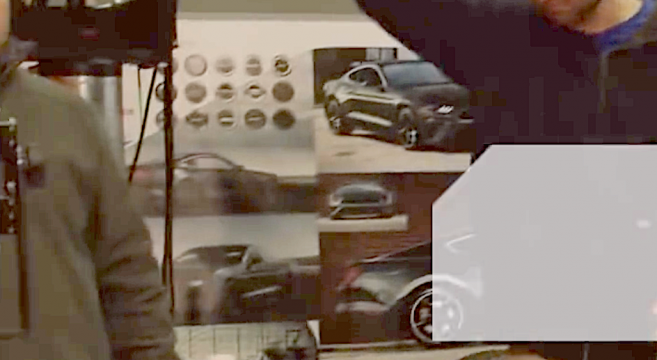 Ford recently teamed up with Dwayne “The Rock” Johnson to introduce the new 2018 Mustang to the world and in the course of his marketing partnership with Ford Motor Company, the star released behind-the-scenes video of a 3-day long commercial shoot held at Ford’s secret facilities in Dearborn.

In one of the scenes, the camera pans past some Ford sketchboards which often contain renderings and drawings of future vehicles and are released along with the production vehicle — such as in Ford’s press kit when it debuted the 2018 Mustang. One eagle-eyed M6G member caught what is unmistakably a Bullitt Mustang, which the company has not offered since 2009.

The renderings show several signs that tip it off as an S550 Mustang Bullitt, from the faux gas cap with crosshairs background which were unique to the Bullitt to the dark green (Dark Highland Green?) paint, stealthy debadged look, and dark torque thrust wheels — all features you would expect on the Bullitt. All of these factors lend credence to the recent rumors we have been hearing regarding a revival of the Bullitt edition for the 2018-19 model year.

Another major clue that this is a vehicle with actual production intentions and not just a designer’s daydream is the sketchboard heading which reads “S550 Mustang MCA” which is Ford lingo for “Mid Cycle Action” or mid-cycle refresh, indicating that this a vehicle projected for the 2018+ Mustang.

Check out the screenshots of what could possibly be the leaked Bullitt S550 Mustang in the forums.