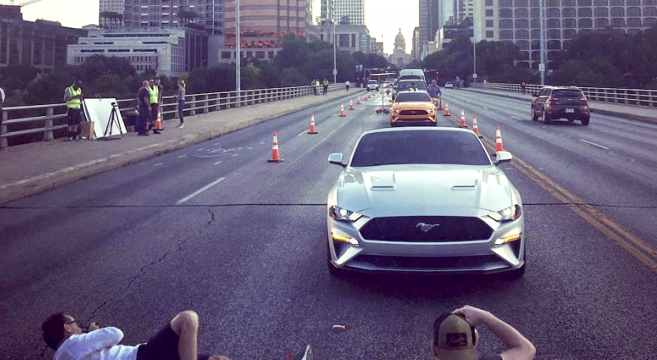 Ford has been pretty quiet about the 2018 Mustang but behind-the-scenes some promotional content is being prepared for the refreshed pony car’s rollout later this year.

A handful of pre-production fastback and convertible 2018 Mustangs — EcoBoost and GT models in various colors, were transported from Detroit to Austin, Texas for a photoshoot around the city’s Lady Bird Lake. Lucky for us, one local Mustang6G member captured it for our viewing pleasure.

As a bonus, after they wrapped up the photoshoot they celebrated by doing what any self-respecting Mustang owner would do — donuts in the parking lot — which thanks to social media gave us a great listen at the awesome upgraded sound of the 2018 Mustang GT!

Check out the 2018 Mustang Austin photoshoot and video clip in our forums.