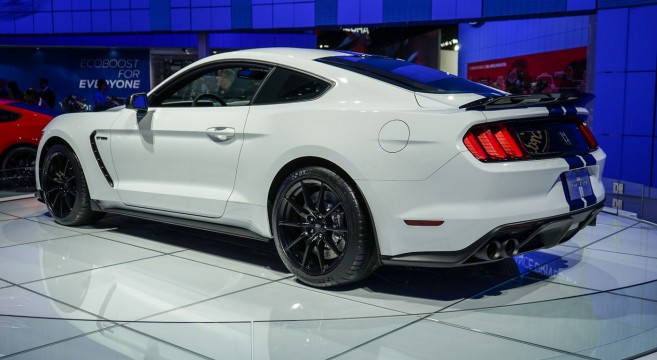 We first reported that the 2017 Shelby GT350 was confirmed in a Ford bulletin to dealerships a few weeks ago and now we have your first look at the various changes and upgrades to make the GT350/GT350R an even greater performer out of the box.

Ford has eliminated the Track Package for the 2017 Shelby GT350, but made its performance and handling features standard on the vehicle including aluminum tower-to-tower brace, MagneRide damping system and transmission and differential coolers, which takes the most track capable production Mustang that Ford has ever built and gives it an even more track focus in base form.

Not only is the 2017 GT350 going to be more hardcore in all trims, but it will also have more flexible options and configurability as previously the track package and technology package options were mutually exclusive.  Ford looks to expand on the options pairing as the 2017 GT350 will be offered with optional electronics package or a new convenience package which replaces the current model year’s technology package.

There are also several exterior trim changes including the addition of the raised decklid spoiler as standard equipment. New colors will be offered as well, including the much anticipated return of Grabber Blue that makes its way to all 2017 model year Mustangs, while Ruby Red and an all-new Lightning Blue will be replacing Competition Orange and Deep Impact Blue GT350s.

Find out all the other new features and packages for the 2017 Shelby GT350 in the forums.