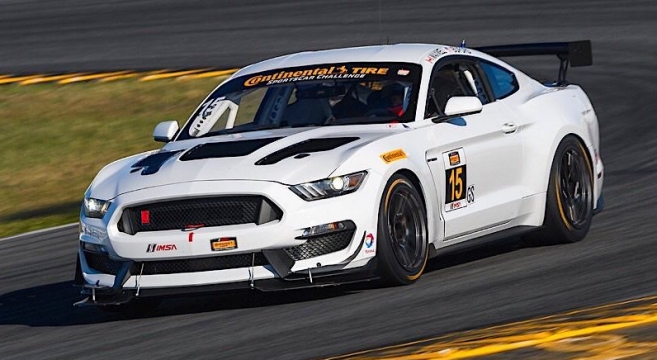 The 2017 Mustang GT4, a derivative of the Ford Shelby GT350R-C Mustang, will be making its season-opening debut at the BMW Endurance Challenge at Daytona later this month.

Ford’s GT4 turnkey race car based on the GT350R-C which won six races and the championship title in its first full season of competition last year in the IMSA Continental Tire SportsCar Challenge, will be piloted by defending CTSC GS class champion Scott Maxwell who will be reunited with former co-driver Jade Buford to represent the Multimatic Motorsports team in the 2017 season.

In its debut at the four-hour long BMW Endurance Challenge in the IMSA CTSC season opener on January 27, 2017, the Multimatic team faces significant challenges on the 3.56-mile road course with a larger GS field and the adoption of GT4 regulations, which has seen 21 cars entered for the annual Roar Before the 24 pre-season test — including stout competitors from Porsche, Aston Martin and McLaren.

The Mustang GT4 is built to FIA GT4 class specifications and is legal and ready to compete in any GT4 series in the world including the Grand Sport class of IMSA Continental Tire SportsCar Challenge, Pirelli World Challenge GTS and European GT4, to name a few.

As noted by Sportscar 365, the Ford GT4 Mustang was the result of heavy involvement from the Multimatic drivers, in particular Scott Maxwell who gave a glowing review of the new race car.

“The biggest difference [between the two cars] is the aerodynamics,” Maxwell told Sportscar365.

“We have a lot more downforce [on the GT4], so that’s the first thing. We have a different engine, so it has different characteristics in the way it pulls, the torque curve, peak horsepower, and things like that… Another thing, the paddle shifts, the new gearbox we’re running, it makes it a lot easier, obviously. It’s a lot cleaner shifting. That helps with lap times.

Maxwell noted that the GT4 was overall quicker and easier to drive than the GT350R-C. “It feels more like a GT racing car, a GTD almost, than what we were running before,” said Maxwell.