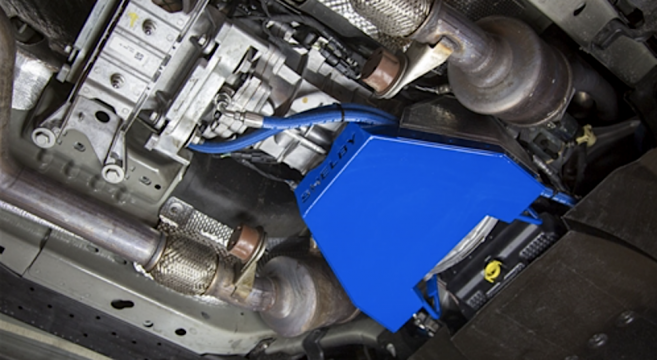 Shelby American has designed and just released a transmission cooler scoop for the 2015-17 Shelby GT350 Mustang. As many already know, Ford has been combatting issues related to overheating transmissions particularly in technology packaged GT350s used at the track.

The GT350 transmission air cooler developed by Shelby’s R&D team is designed to deliver cold air directly up to the vehicle’s transmission and it also provides a shield to isolate the transmission from heat from the catalytic converters.

Representatives of Shelby American assured us the part has been tested extensively: “We have tested the cooler scoop out at a track with a tech pack GT350 and the scoop provided the appropriate cooling to fix the limp mode issue.” Although no hard numbers were provided, our GT350 owners were on the front lines clearing the path to a solution, as usual.

One M6G member has already ordered and installed the Shelby cooler scoop and has provided the community with before and after test results showing differences in transmission temperatures at timed intervals. The unscientific results show that with the cooler scoop installed the transmission ran up to 20-30 degrees cooler than without the Shelby part.