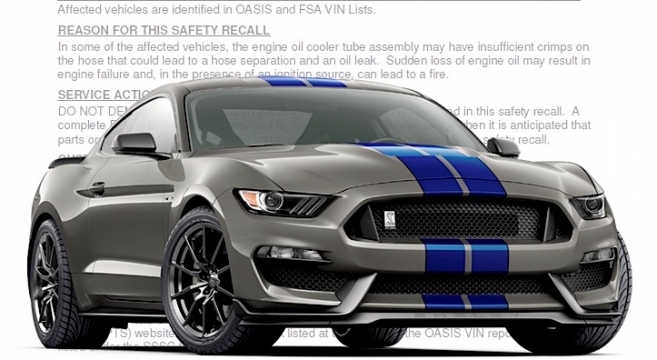 Ford Safety Recall 16S40 relates to GT350 and GT350R Mustangs with potentially faulty engine oil cooler tube assemblies that may have insufficient crimps which could lead to a hose separation and oil leak. Left unresolved, the effected vehicles within the suspect date range may experience sudden loss of engine oil which may result in engine failure and increased risk of fire.

GT350/R owners can check if the recall applies to their vehicles by visiting one of these sites:

While it is yet unclear the exact breadth of effected vehicles, anecdotal owner testimony on our forums and an independent search of sample VINs suggests that many, if not most GT350/Rs built in the suspect date range are impacted. It is important to note however, that we have confirmed at least a few GT350s within the suspect date range that are unaffected by the recall.

[UPDATE: Ford has announced there are approximately 8,026 vehicles affected, including 6,523 in the United States, 957 in Canada 346 in Mexico and 59 in federalized territories.]

The recall has also been found to affect vehicles irrespective of trim and packaging including the base GT350/R and ones equipped with the technology, track, convenience and electronics packages. This is because all GT350 and GT350Rs have engine oil coolers even if tech pack owners do not have differential or transmission coolers.

Importantly, the recall notice prohibits all Ford dealerships from demonstrating, selling or delivering any new in-stock vehicles involved in the safety recall. To ensure this is followed Ford will prevent dealers from displaying any of the involved vehicles or any GT350/R that was ordered and arrived within the suspect date range.

Owners will have to sit tight through the winter as the remedy will be no sooner than January 2017 and possibly as late as March. A complete Dealer Bulletin will be provided to dealers in the first quarter of next year, when it is anticipated that parts ordering information and repair instructions will be available to support this safety recall.

There is no word yet on whether the issue is the result of a supplier manufacturing error or product design flaw.